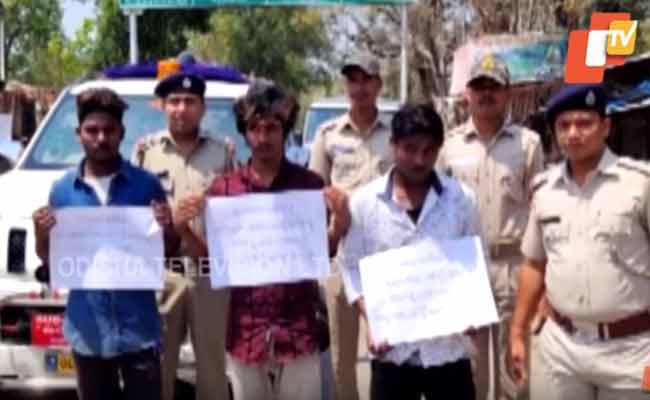 A youth is asked to do sit-ups – and asked to keep counting as he does so. At another end of the state, two youths and their bikes are caned by lath-wielding cops. Elsewhere, four youths are asked to sit on their hunches, move their hands between their legs, hold the back of their head with them and then keep moving, like frogs (the way school children were punished by teachers in the days before corporal punishment was banned under RTE)! Meat and fish sellers at a weekly haat in Bhubaneswar, permitted by authorities to do business even during the lockdown period, are verbally abused, held by the collar, threatened with dire consequences and forced to shut shop. The meat sellers try to point out, feebly, that they are exempted from the restrictions imposed by the government. But the police officer, a lady, would have none of it!

And now the winner. Three youths out on the streets at Baliguda in Kandhamal are given a placard with a message, asked to read the message aloud (for the benefit of the TV cameras, I guess) before wearing them on their shoulders, a la hardened criminals. The message, written in Odia, reads: “I am a selfish man. In my desire to have some fun, I have pushed society towards danger. And I am not even ashamed about it.” One of the youths, who obviously dropped out of school early, reads the three lines haltingly and with great difficulty. As if this wasn’t bad enough, the police officer then uploaded the whole video of the public humiliation of the three youths on social media. His explanation: this was required to drive the point about staying put at home during the lockdown period and deter other potential violators from violating the restrictions in place.

There are no prizes for guessing that all the people, mostly youths, referred to above, were treated by the police the way they were for violating restrictions during the 21-day, countrywide lockdown imposed due to the Corona scare. At any other time, all these acts would have drawn howls of protest from the human rights activists and the media, led to protests, demonstrations and dharnas. Videos of the public humiliation of the Kandhamal youths would have gone viral on social media. Petitions would have been filed with the National Human Rights Commission (NHRC) and Odisha Human Rights Commission (OHRC). In all probability, the customary notice asking for a reply ‘within four weeks’ would have been issued to the concerned authorities by both these statutory bodies by now!

But then this is not ‘any other time’. This is Corona Time. And extraordinary situations, as they say, call for extraordinary responses – and, I dare say, extraordinary, extra-judicial, extra-constitutional methods too! The silence of the ‘human rights defenders’ is deafening. It is as if all of them have gone into collective hiding to save themselves from the killer virus that is roaming the world at lightning speed looking for bodies to spread its venom. They are nowhere to be seen even on social media – which, mercifully, still remains unrestricted – where they are usually at their most vociferous in protesting against violation of human rights. Given the extraordinary powers the law enforcement agencies have assumed to enforce the ban on straying out of home, may be they are just cowering in fear themselves lest they are themselves hauled up for ‘abetting’ and ‘defending’ what has suddenly become the biggest ‘crime’ in the country. And one can hardly blame them for this. Who would want to take the trouble of staying in ‘isolation’ in the police station for a night and then put on a ‘14-day quarantine’ in the jail in these difficult times?

As for the media, it has, of course, done its primary job of reporting the incident. If it hadn’t, we would perhaps have never known about it. But difference in the way it was covered and the way similar incidents of human rights violation, invariably by the lath-happy police, have been covered in the past could not have been starker. In another time, the same incident would have been reported in a way that pointed an accusing finger at the police, would certainly have been accompanied by the customary ‘bite’ from a ‘human rights defender’ and would have become the basis for the petitions filed with the NHRC and OHRC. But on this occasion, there was nothing of the sort. Instead, there was an unmistakable tone of indulgence, even admiration, for what the police had just done. Perhaps too grateful to the concerned police officer for providing them a ‘juicy story’, no one bothered to ask him which section of the CrPC or provision of the law gave him the power to humiliate the youths in public and then making it far worse by posting the video on social media. As ‘awareness drives’ go, this one certainly takes the cake!

Does human rights go into ‘suspended animation’ in times of emergency, even as great a world emergency as the Corona menace? If yes, why is Indira Gandhi still being pilloried for suspending fundamental rights during the Emergency more than four decades after her death? We all know that the 44th amendment, enacted after the Janata Party came to power in the post-Emergency elections in 1977, restored the fundamental rights. We also know that the Supreme Court later ruled that even Parliament doesn’t have the powers to change what it called ‘the basic structure of the Constitution’. And it is obvious that fundamental rights are ‘basic’ to the constitution.

That, as of now, is the constitutional position. And to the best of the knowledge of this columnist, no constitutional amendments – or even amendments to the IPC and CrPC – have been enacted to deal with the extraordinary situation brought about by what US President Donald Trump has provocatively described as the ‘Chinese virus’.

One shudders to think about what other ‘novel’ methods does the police have up its sleeves to ‘raise awareness’ if, god forbid, the lockdown extends beyond the 21-day period!!