Rail Connectivity To Statue Of Unity: PM Modi To Flag Off 8 Trains Jan 17

Bhubaneswar: Prime Minister Narendra Modi will flag off eight trains connecting different regions of the country to Kevadiya on January 17  via video conferencing. As per official sources, these eight trains will facilitate seamless connectivity to the Statue of Unity.

Prime Minister will also inaugurate several other projects related to the Railways sector in Gujarat during the event. Chief Minister of Gujarat and Union Railways Minister will be present on the occasion.

These buildings have been designed aesthetically incorporating local features and modern passenger amenities.

Kevadiya station is India’s first railway station with a Green Building Certification. The projects will add fillip to the development activities in the nearby tribal regions, boost connectivity to important religious and ancient pilgrim places nestled on the banks of River Narmada, increase both domestic and international tourism, act as a catalyst for overall socio-economic development of the region while also helping generate new employment and business opportunities.

Apart from this Jan Shatabdi Express has been provided with the latest “Vista-dome tourist coach” which will provide a panoramic view of the skyline.

The details of the eight trains being flagged off are as under: 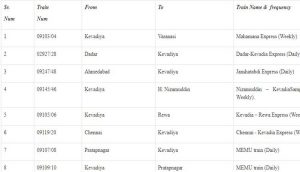