The annual sojourn of Lord Jagannath and his siblings Goddess Shubhadra and Lord Balabhadra, famously known as- Ratha Jatra culminates with the return of the Holy Trinity from their aunt's place at Gundicha Temple to Srimandir. This return journey is known as Bahuda Jatra. Nine days after the Rath Jatra, the Bahuda Jatra, or the return journey, takes place. The holy festival is missing the usual pomp and grandeur and participation of lakhs of devotees due to the Covid-19 pandemic situation for the second year in a row. Elaborate preparations with water-tight security cover have been put in place for the smooth conduct of the festival. The district administration has imposed curfew in Puri town for the festival, prohibiting congregations even on rooftops. OTV brings you the happenings on the Bada Danda (Grand Road) live during the return sojourn of the Holy Trinity on their gigantic chariots. Check out all the latest updates here.

Odisha DGP Thanks All For Smooth Completion Of Bahuda Jatra

Odisha Police DG Abhay expressed gratitude to police personnel, administrative officials and mostly the people of Puri and outside in cooperating well with the organisers for hassle-free conduct of the Bahuda Jatra of the Holy Trinity.

Curtains came down on the return Car Festival of the Puri Holy Trinity after the arrival of the three chariots of the deities at Srimandir following a week-long stay at Gundicha Temple. 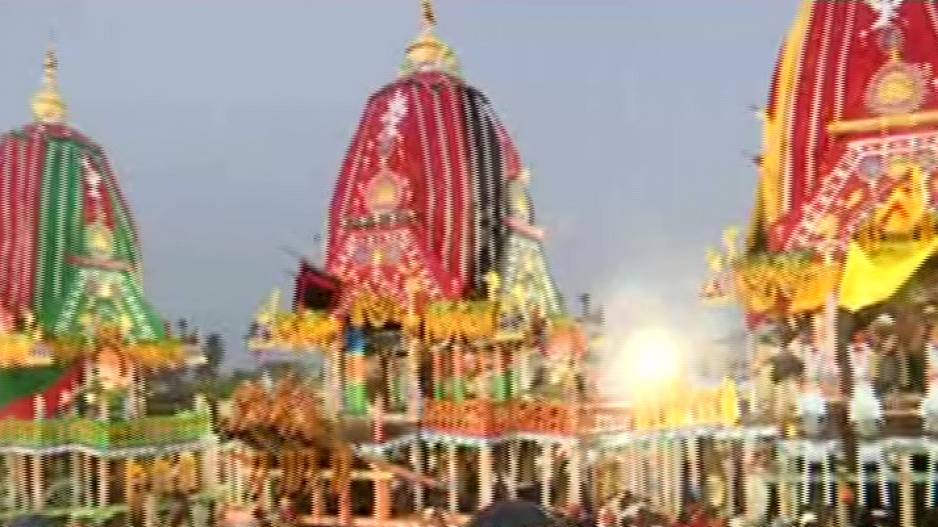 Laxmi Narayan Bheta is the most entertaining spectacle of meeting between Lord Jagannath & Goddess Laxmi soon after the Mahaprabhu arrives at Srimandir. The get-together, which symbolizes how love builds on discord and both are inseparable, has a special significance in the life of humans.

As per tradition, Lord Jagannath is forced to wait due to an angry Goddess Laxmi who refuses to allow the Mahaprabhu's chariot to join His elder brother Bada Thakura Balabhadra and Devi Subhadra in front of Srimandir. To diffuse the tensions, Gajapati intervenes and escorts Goddess Laxmi to the Nandighosha chariot where the divine meeting takes place with Lord Jagannath. 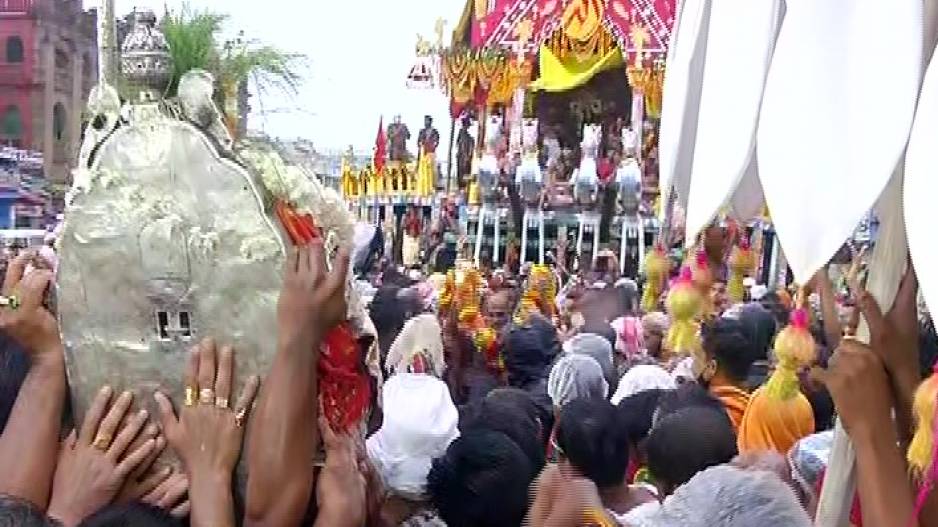 It is believed that Goddess Laxmi remains angry with Lord Jagannath for not taking Her on their annual sojourn to Gundicha Temple even though the occasion of Rath Yatra commenced just a few days following the completion of their divine wedding ceremony.

Bada Thakura Balabhadra arrived at Srimandir on his Taladhwaja chariot while followed by His dear sister Subhadra and lastly Mahaprabhu Jagannath accompanying him on His Nandighosha.

Pulling of chariots of the Holy Trinity witnessed euphoric scenes as heavy rainfall lashed Bada Danda. Servitors pulling the Raths were elated after the rain relief. 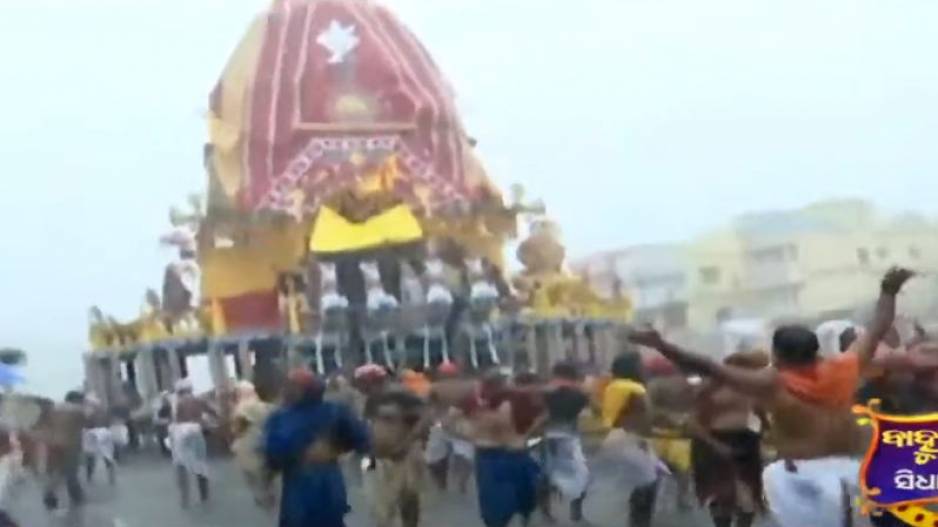 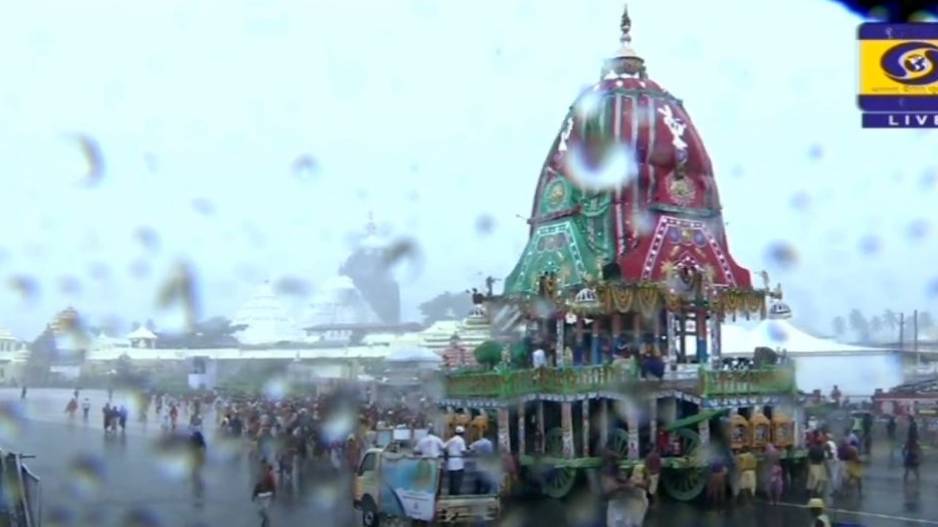 Making his homeward journey to the Srimandir on His splendid Nandighosha, Mahaprabhu Jagannath made a brief halt near Mausi Maa Temple where he was offered the exquisite and His most loving Poda Pitha. 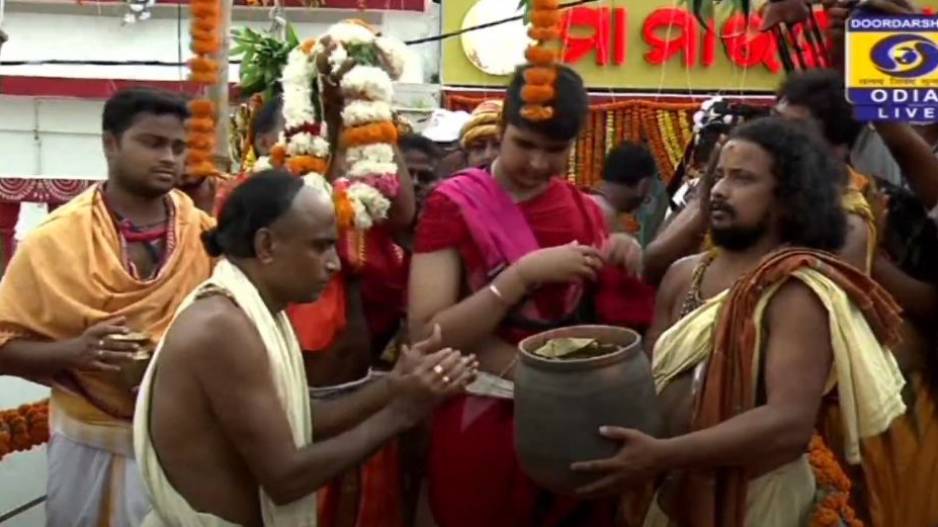 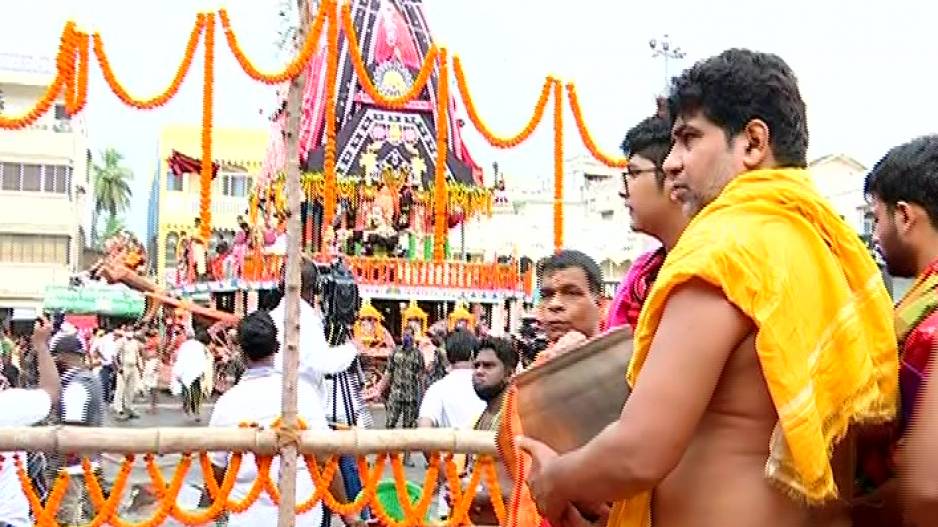 Juggernaut Rolls On! Lord Jagannath Rides Back To Srimandir

Finally, the moment everyone has been waiting for arrived as Lord Jagannath commenced his journey back to the Ratna Singhasana. The Lords' annual sojourn to Gundicha Temple ends on an emphatic note as Nandighosha chariot rolls on the Bada Danda towards the Srimandir. 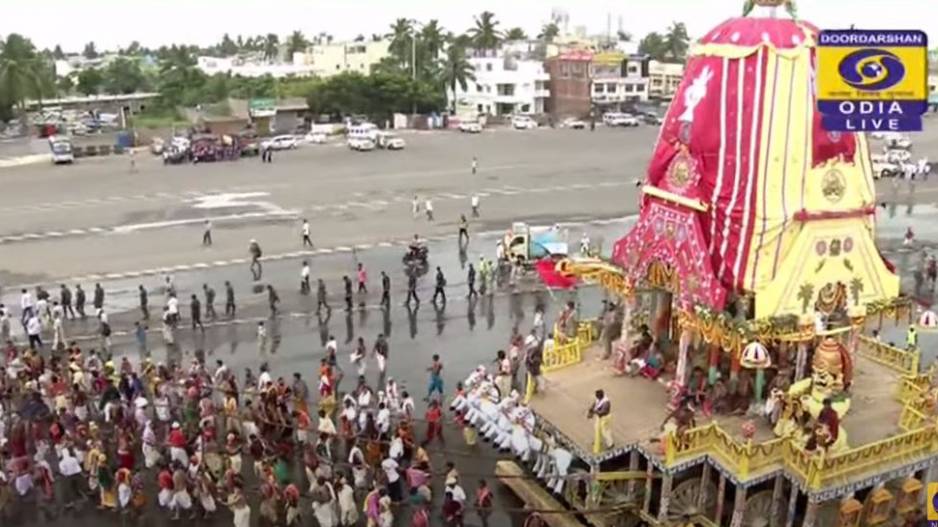 Following in the footsteps of her eldest brother Bada Thakura Balabhadra Devi Subhadra has commenced her return journey to Srimandir amid a mark of religious pomp and fervour. 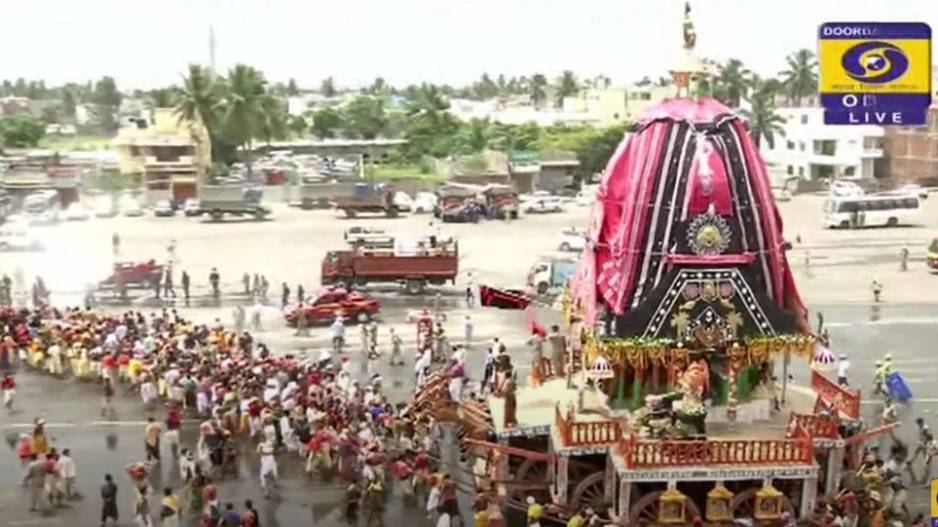 Puri Gajapati Dibyasingha Deb completed a rare milestone in the centuries-long association of the erstwhile Kingdom family of Puri and the world-famous Lord Jagannath Temple as he marked 50 years in conducting the Chhera Panhara rituals of the Holy Trinity. 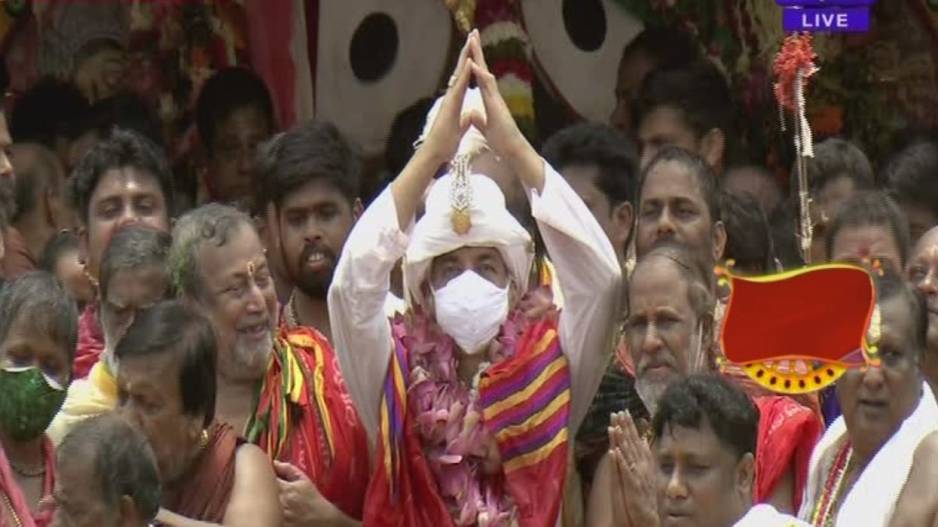 Known as the foremost servitor of the Lords, he performed first Chhera Panhara in 1971 after ascending the throne in 1970 at the age of 17 following the death of his father, the then Maharaja of Puri, Gajapati Birakishore Deb. Dibyasingha Could not attend the special niti in 1976 as he was pursuing higher education in the United States.

Puri was a big draw for medieval saints from across the country. The most notable among them were Shankaracharya, Shri Chaitanya, Ramanujacharya, Ballabhacharya, Guru Nanak, Kabir, Tulsi Das and Swami Ramdas. These saints not only visited Srikhetra to get a glimpse of the Lord, they left their footmarks here by establishing famous mathas.