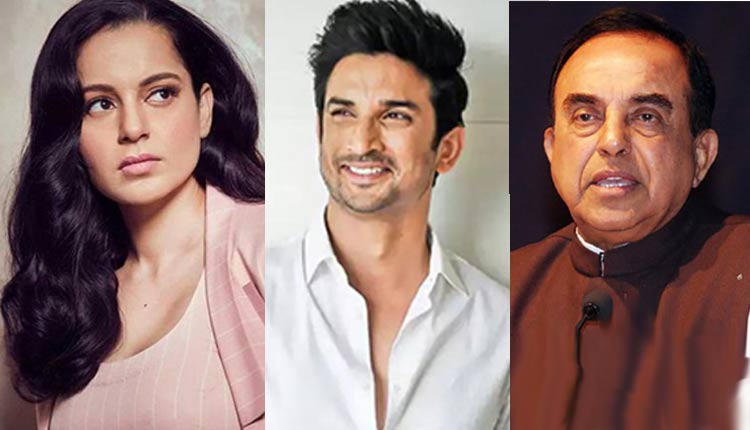 Subramanian Swamy has finally decided to take a plunge in the Sushant Singh Rajput’s case. A couple of days ago he hired a lawyer to look into the entire matter and to find out whether they can demand a CBI inquiry based on the legal norms and evidence that are currently available. The BJP MP shared on Twitter that he has appointed advocate Ishkaran Bhandari to look into it. In his tweet, the senior political leaders says, “I have asked Ishkaran to process Rajput alleged suicide matter for a possible CBI case or PIL or Criminal complaint case. “

Presently in the Sushant Rajput case, Ishkaran is looking to see if Sections 306 and/or 308 of India Penal Code read with Article 21 of the Constitution is applicable. That is, whether accepting the Police version of it being a suicide, was the Actor driven to it?

I have asked Ishkaran to look into facts of Sushant Singh Rajput death case & see whether it’s a fit Case for CBI investigation. Then accordingly to see justice is done. For Updates follow @ishkarnBHANDARI

For more than a month many celebrities including actor turned politicians Shekhar Suman and Roopa Ganguly has been demanding the CBI probe. But now Swamy has ensured that the entire case is examined and studied properly by an expert and accordingly actions are taken. Importantly, the senior politician has also questioned the stand of the three Khans in Bollywood –Salman Khan, Aamir Khan, and Shah Rukh Khan. In his tweet, Subramanian has questioned the silence of these three musketeers’ of Bollywood.

Are the three musketeers of Bollywood Salman Khan, Sharukh Khan and Aamir Khan silent on so called suicide of Sushant Rajput ?

These three bahubali actors in film industry in india are nexus with in them .They will not support a person who has not blessing of parents who belongs to mafia industry. They are not safe in india as they told due to mob bleaching. What is going on in your industry .

He has further stated that the assets these Khans have created in Dubai including their bungalows and properties should be investigated by CBI, ED, IT, and STI.

The assets created by these 3 Khan Musketeers in India and abroad especially in Dubai need to be investigated . Who gifted them bunglows and properties there and how they bought it and the cartelisation needs to be investigated by SIT of ED , IT and CBI. Are they above the law?

During his interview related to the case, the senior parliamentarian stated that since Sridevi died in a foreign country there was nothing much the Indian government could do regarding the investigation. But Sushant was killed in India and being a democratic country, all the facts should be investigated and questions should be probed so that justice prevails.

It should be noted that when Sanjay Dutt was arrested under TADA, the entire industry had come forward demanding justice for him. But the same industry people have failed to take a stand in the case of Sushant Singh Rajput even though fans have been demanding a thorough inquiry into the matter as several things point out that he was either forced to commit suicide or was murdered.

All of them came to support #sanjaydutt when he went to jail… Nd here #susantsingrajput… One among them has died nd no one even speaks. Shame on whole bollywood gang.#MahaGovtCBIForSSR pic.twitter.com/5hq9xaCPRM

There is a strong possibility that the CBI inquiry might uncover some hard truths that will rattle the entire film fraternity which is why no one is encouraging the investigation or taking a stand.

Kangana Ranaut has appreciated the efforts of Swamy and has attacked the three Khans of Bollywood saying that the trio of Salman, Aamir, and Shah Rukh has underworld connection. In her tweet, she says Bollywood is a corrupt industry and things like how Salman tempered with the evidence during a case against him should be investigated.

Amir, Salman, Shahrukh has connection with Underworld too.

Please bring in light the cases against Salman how he tempered with all the evidences against him in several cases.

Bollywood is a corrupt Industry.
Sex and Drugs are common in there, it’s just no one do S.Op.

The Queen of Bollywood has been constantly demanding an inquiry into the Sushant Singh Rajput case and is not satisfied with the way the Mumbai Police is handling it.

Apart from these celebrities and politicians, thousands of fans have been demanding CBI inquiry in the case of Sushant Singh Rajput with many doing a candle march in the hometown Patna of the Kai Poche actor.

Here’s what people feel and are demanding:

#Sushant was a public figure. Even @itsSSR family are not going stand with public to support #MahaGovtCBIForSSR we not going to STOP.
Remember who ever do not want #CBIEnquiryForSSR indirectly knows or involved murder conspiracy. @ishkarnBHANDARI @Swamy39 @shekharsuman7

We demand a sensible and responsibl citizen of india the CBI enquiry most be needed in the death of Sushant sing Rajput .A man who multiple talent very nice person salef made actor hard worker simple living person a man who loves others .