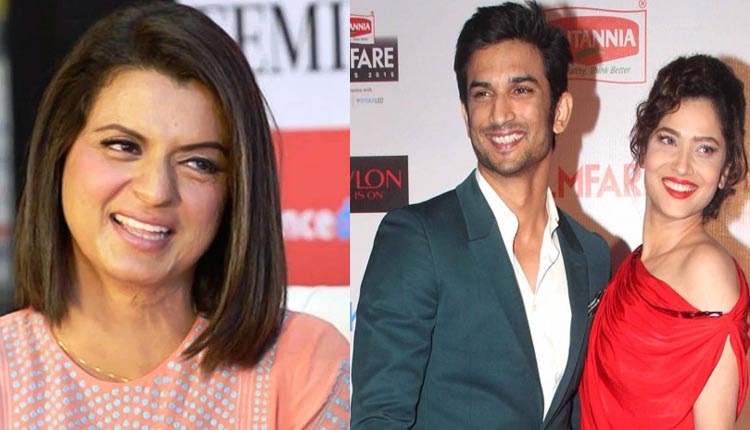 Sushant Singh Rajput committed suicide on 14 June. He was a famous actor with a large fan following. His sudden death has come as a shock with many calling his suicide a murder. The police are already investigating every angle, and until now have interrogated more than 20 people in this case. Everyone who had some connection with the Kedarnath star has shared her/his feelings, videos, and even accused big names in Bollywood for Sushant’s suicide.

Ankita Lokhande and Sushant Singh Rajput dated for six long years and had also planned to get married by the end of December 2016. But their sudden breakup and his liaison with Raabta actress Kriti Sanon shocked his fans. Alcoholism, abuse, and more were cited as the reasons for their breakup but Sushant just said that they have grown apart. Now it seems the truth is finally coming out and the one to reveal it is none other than the sister of Kangana Ranaut, Rangoli Chandel.

PR Team Forced Sushant To Break Up From Ankita?

Sushant Singh Rajput and Ankita were very close to Sandip Singh who recently shared a sweet post in the memory of his friend. Surprisingly, in this post, the director has not said a word about Sushant’s latest girlfriend Rhea Chakraborty but stated that it was only Ankita who could have saved the actor. Sushant had even agreed that he will be always indebted to his Pavitra Rishta co-star because of the support she offered during his journey from a television actor to a film star.

Dear Ankita, with each passing day, one thought keeps haunting me over and over again. Kaash… I wish… We could have tried even harder, we could've stopped him, we could've begged him! Even when you both seperated, you only prayed for his happiness and success… Your love was pure. It was special. You still haven't removed his name from the nameplate of your house❤️ I miss those days, when the three of us stayed together in lokhandwala as a family, we shared so many moments which bring tears to my heart today…cooking together, eating together, ac ka paani girna, our special Mutton bhaat, our long drives to uttan, lonavala or Goa! Our crazy holi! Those laughs we shared, those sensitive low phases of life when we were there for each other, you more than anyone. The things you did to bring a smile on Sushant's face. Even today, I believe that only you two were made for each other. You both are true love. These thoughts, these memories are hurting my heart…how do I get them back! I want them back! I want 'us three' back! Remember the Malpua!? And how he asked for my mother's Mutton curry like a little kid! I know that only you could've saved him. I wish you both got married as we dreamt. You could've saved him if he just let you be there…You were his girlfriend, his wife, his mother, his best friend forever. I love you Ankita. I hope I never lose a friend like you. I won't be able to take it.

The actor’s psychiatrist has gone on record saying that the Kai Po Che actor regretted breaking up with Ankita and was not happy with Rhea. Now Kangana Ranaut’s sister Rangoli Chandel has joined this interaction saying that it was the PR team of Sushant that forced him to break up with his longtime girlfriend.

Tagging Sandip Singh’s post and appreciating his feelings, Rangoli further added that Sushant hired a fancy PR who works for Bollywood mafia. She changed his mindset telling Sushant that people do not fall in love because everything here is branding. The publicist convinced the actor that he had to be paired in public with an exciting actress to enhance his brand building.

From pressurizing him to shift from Malad to Bandra where all the celebs live to break up with Ankita who was just a television actress, Rangoli says the PR did everything to break the spine of Sushant.

So nicely written Sandeep, he hired a fancy Bollywood PR, she works for movie mafia she told him you need exciting pair to create media frenzy like your contemporaries, here people don’t fall in love because they are in love here every thing is branding, build your brand this is the time forget your personal weaknesses now, date a super model like Ranveer or Ranbir or someone with connections who comes from film family, it’s not good for your image to live in Malad with a tv actress if you want to be in the big league you must behave like them, walk like them, live where they live otherwise you will always be a struggling tv actor, Ankita and Shushant had bought a house together he left, she was devastated but they broke his backbone, he shifted to Bandra, these fake friends surrounded him he started to date super models but he was lost, when I had known this long back because of common friends I thought to myself all this won’t help, and that’s exactly what happened no matter what he did they didn’t accept him they didn’t let him live either, their strategy worked soon fake PR and friends left and he got lonely and depressed, they used this opportunity to hit him even harder with more nasty gossiping and bigger bans and finally he left …… you are right wish there was a way to block those blinding lights of show business and it’s fake promises …. wish there was a way to block the mirage that movie mafia flash at every outsider who is loaded with talent, grit and ambition … 💔

Finally, these fake friends and promises led to depression due to which Sushant committed suicide. Rangoli Chandel has been known to make accusations at many big stars, producers, and directors. On the other hand, everyone knows that Ankita was devastated due to her breakup. Similarly, the actress was an important part of Manikarnika: The Queen of Jhansi directed by Kangana Ranaut. So naturally, Rangoli has a soft spot for her.

Fans are demanding CBI inquiry but until the truth comes out, no one will know exactly what forced Sushant Singh Rajput to end his life.

Kangana Ranaut Desperate To Be In ‘Good Books’ Of Karan Johar?