Column: Fault-finding can wait for a more opportune time 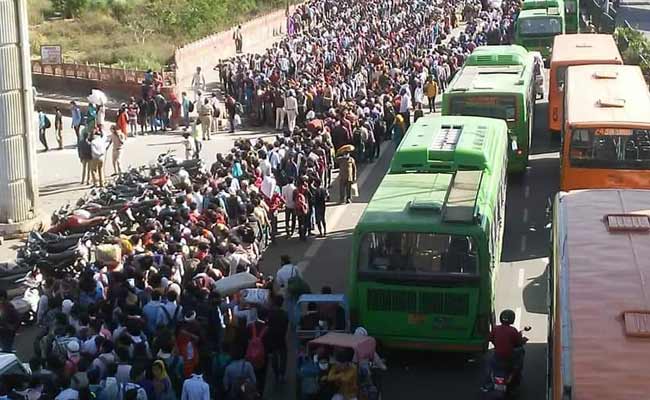 As if the unprecedented, 21-day nationwide ‘lockdown’ wasn’t bad enough, we now have a monumental human tragedy on our hands. As a billion plus people remain in forced confinement in the safety and comfort of their homes and try to rediscover the joys of family life, tens of thousands of migrant workers are out on the streets, walking, cycling or hopping on to any motorized vehicle they can climb on to – in a desperate bid to reach their native places, to be with their families at this moment of unforeseen distress!

There are pregnant women among them. One of them sneaking out of Delhi on Sunday told a TV reporter she was five months pregnant! This is the period when women are advised not to do hard work, shun stress and take plenty of rest. And this woman had already trekked, carrying the baby growing inside her, for seven kilometers and still had plenty to cover! In another part of the city last evening, one saw over 50, 000 people converged at a place in their desperate efforts to get out of the Big Bad City and reach the safety of their homes at any cost, putting their lives on the line and making a mockery of the ‘lockdown’ restrictions in the process.

Cut to Odisha. Hundreds and even thousands are people walking in a file, their implements on their shoulders, hundreds of kilometers back home in the absence of any form of transport. One of them, on his way to his village somewhere in Ganjam, told a TV channel he had already covered over a 100 km in reaching Bhubaneswar and was still only half way through his journey! With the ban on inter-state and even inter-district migration kicking in the same day (Sunday), I doubt if this man would be able to cross the borders of Khurda, forget reaching his village! All, evening, I have been receiving SOS calls and videos from stranded groups of migrant Odia workers, who are complete strangers to me. Their desperate cries for help tore my heart asunder. I felt utterly miserable at the sheer helplessness of not being able to do anything more than sounding out the relevant government authorities and forwarding the video SOSs to friends in TV channels for wider circulation, in the fond hope that their anguished cries will be heard by the authorities.

An aside here. During a rather long chat on Sunday afternoon with a school buddy, who had called from London to ask about my well-being, I told him one reason I could never really become what conventional wisdom defines as a ‘successful journalist’ was I was never able to stop wearing my heart on my sleeves while at work. The friend replied, like all good friends do, “And that’s what makes you different, yaar! And that’s precisely what we all love you for!!” [I am fully aware I am essentially patting myself on the back in narrating this story. But trust me I have not cooked up the story to do so. Every word of the conversation is true. As a writer, I guess I do have the liberty to engage in self-indulgence once in a while, no?]

Coming back to the enormous humanitarian crisis we have on our hands, it is obvious that neither the central nor the state government had factored in this massive segment of the population and the possibility of them seeking to flee their place of work in panic or out of helplessness while hastily drawing up their plans to meet the unprecedented global emergency brought about by a tiny virus called nCorona. The massive gathering seen in Delhi and the several kilometer-long queues of labourers walking back to their homes were testimony not just to the failure of the two governments but to our collective failure as a nation to provide succor – and more importantly assurance, that they and their families back home will be looked after well during this whole period of crisis. And now when the governments are waking up to this massive crisis and hurrying up with measures to provide them the wherewithal to live at their place of work, they are presented with the massive task of stopping tens of thousands of desperate and panicky labourers, fed by wild rumours of an indefinite extension of the countrywide ‘lockdown’, from fleeing across state and district borders.

Sitting in the comfort and security of our homes, it is easy to turn our nostrils at ‘these people’ while watching them on TV and muttering; “When will these god-forsaken people learn? Can’t they see the danger they are posing to themselves, their families back home and society at large in doing so? Why can’t they just stay put?” Why Indeed? We would never really know because we are never going to take the trouble – and the risk of defying the ‘Corona Curfew’ in place – to accost them as they are fleeing and ask them ‘Why indeed?’ If we did, we would know that we haven’t really given them much of a choice. Already out of work for five days – and without a proper shelter since they came – they are staring at a uncertain future. Most of them have already run out or are on the verge of running out of money and are staring at starvation in the days ahead. It is not that they are not aware about the perils of fleeing at this juncture. But it’s a classic ‘Devil and Deep Sea’ choice for them that we, sitting in our homes, have no way of knowing. Where is the guarantee that they won’t contract the deadly disease, if they stay on. When you don’t have two square meals a day or a roof over your head, sanitizers, masks and the like are unaffordable luxuries, not bare essentials, as they are for ‘People Like Us’. “If we have to die anyway, we would rather die at home, in the presence of our family. Wht’s the point in dying without food or due to the disease in this heartless, unfriendly foreign land?” seems to be the dominant thinking among these hapless people.

There is no doubt that they need to be stopped where they are. The risk a mass exodus on such a scale would pose to our collective and extremely difficult fight against the all-conquering virus is too great and simply not worth taking. But the challenge is to find a humane way of doing it and not by wielding the baton. Their families back home need to be provided succor and assured about the safety, security and well-being of their near and dear ones in the cities too. Needless to say, it’s an enormous challenge for any government.

The challenge for the Odisha government, in particular, is even greater than that of some other states. As one of the states with a huge outgo of itinerant/migrant workers, estimated to be around four million – the others being Chhattisgarh, Jharkhand, Bihar and UP – it would be a tough task for the Odisha government, already struggling with the huge task of checking the spread of the pandemic, to look after the well-being of its people stranded in other states.

The enormity of the challenge requires a temporary redrawing of the equations between various arms of the polity. But for a few exceptions at a lower level, the Opposition has already played its part by refraining from lashing out at the government day in and day out. And now, it is the turn of the rest of us, including the media, to keep our daggers on hold for now and do our bit by assisting government efforts to meet the enormous challenge. That’s the call of the time.

Fault-finding can wait for a more opportune time.

COVID-19 Fight: Support Pours In From Many Quarters For PM-CARES Fund