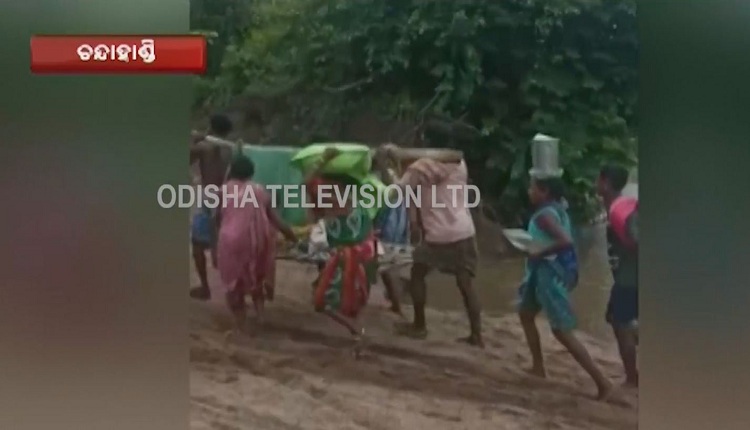 Nabarangpur: Instances of pregnant women being carried in slings and cots to hospitals for delivery due to lack of motorable roads in several interior pockets of the State seem to have become a regular affair. Another such incident has come to the fore on Wednesday when villagers had to use a cot as a stretcher to carry an expecting mother up to an ambulance by crossing a river in the absence of proper road connectivity to the village.

The incident has been reported from Gorajharia village under the Chandahandi block in the district.

According to sources, the villagers made an emergency call on 102 ( for ambulances) after fellow villager Maheswar Santa’s wife developed labor pain. But, the ambulance could not reach the village due to the unavailability of a motorable road.

Finding no other option, Santa along with some fellow villagers and ASHA worker carried the woman on a cot and crossed the river to reach the ambulance. However, while she was being carried to the ambulance the woman delivered mid-way.

Later, the woman and newborn were rushed to the district headquarters hospital (DHH).