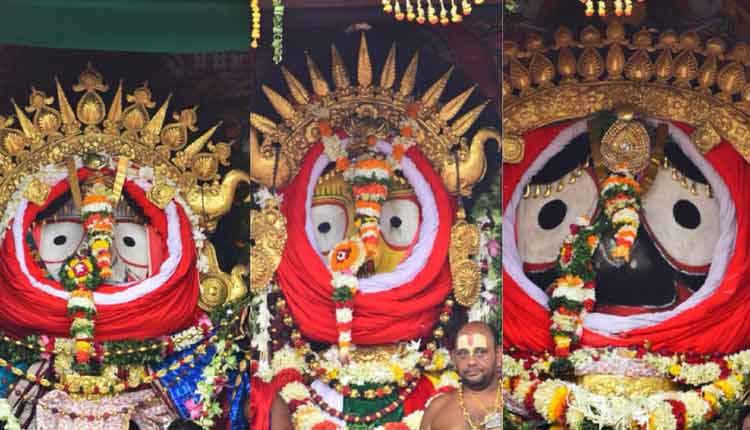 Puri: With the conclusion of the Bahuda Yatra on Wednesday, the divine triad of Bada Thakura Balabhadra, Devi Subhadra, and Kalia Thakura on their chariots on Puri Bada Danda will don a resplendent attire of gold and silver ornaments in a special ritual called ‘Suna Besha’ today.

As per the centuries-old practice, the golden avatar also called the Rajadhiraja Besha of the sibling deities is performed a day after the return Car Festival when the Lords come home after a 9-day sojourn at Gundicha Temple.

According to the ritual schedule, the decoration of the deities by servitors will begin at 4 pm after the completion of Madhyana Dhupa. The entire ornamentation process will be completed by 5.30 pm, informed Shree Jagannath Temple Administration (SJTA).

Unlike every year, the rituals will be performed without the congregation of devotees on the Bada Danda due to the restrictions imposed in the wake of Coronavirus pandemic. People can watch the event live on television by staying at home.

History says ‘Suna Besha’ of the Lords was introduced during the reign of King Kapilendra Deb in the year 1430. The deities wear glittering gold jewellery weighing nearly three quintals. The ornaments are stored at Srimandir’s treasury called Ratna Bhandar.

As per the tradition, at least 25 ‘Bhandara Mekap’ servitors bring out the gold and silver ornaments from the storeroom of the temple and hand it over to Puspalaka and Daitapati servitors on the chariots who then decorate the Chaturdha Murati with the jewellery.

Hasta (hand), payar (feet), mukuta (tiara or large crown), mayur chandrika- a peacock feather design which was used as head decoration by Lord Krishna, chulapati- a forehead costume which highlights facial beauty, kundal (hanging ear-rings), rahurekha- a half square-shaped decorative adorned across the face of the deity, malas or necklaces of various types such as padam (lotus), sevati (small sun flower), agasti in the shape of moon flower, kante (large gold beads), mayoor in the form of peacock feathers, and champa- a yellow flower, sri chita representing the third eye of the deities, chakra or wheel, gada or mace, padma a lotus flower, and shankh or conch are some of the gold designs used to decorate the Lords during the special occasion.

Speaking on the ritual, SJTA chief administrator Krishan Kumar said, “I hope the nitis will begin at the scheduled timings. The rituals will be telecast live on television for around two and a half hours so that devotees around the world can get the darshan of the deities,” informed.

The Puri district administration meanwhile has made all the arrangements in compliance with the Supreme Court’s order on the conduct of the Rath Yatra.

The administration has relaxed the curfew from 5 am to 3 pm today but the restrictions will be re-imposed from 3 pm to 10 pm for the Suna Besha. However, day-long restriction on public congregation has been clamped from the stretch between Market Chhak to Singhdwara, informed Puri district Collector Balwant Singh.

On Wednesday, Bahuda Yatra, the return journey of Lord Jagannath, and his siblings concluded smoothly.

Pulled only by servitors in the absence of any devotees due to Covid pandemic, the chariot of Lord Balabhadra reached the Singhadwar first at 2.46 pm followed by Devi Subhadra’s Darpadalana at 3.06 pm. Finally, Nandighosa chariot of Lord Jagannath arrived at Srimandir.