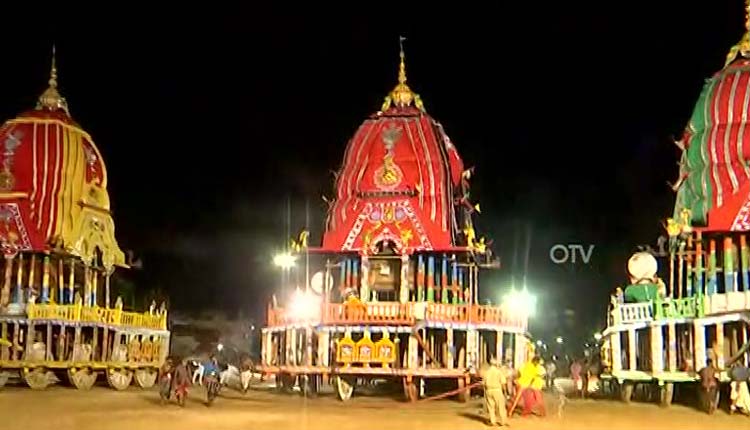 Puri: All the servitors to be engaged in Lord Jagannath’s Bahuda Yatra tomorrow have tested negative for COVID19, informed Krishan Kumar, chief administrator of the Shree Jagannath Temple Administration (SJTA).

However, Kumar said that details of the COVID test of government officials, policemen and others present during the Rath Yatra will be provided later.

Speaking to the media after a review meeting on preparations for the Bahuda Yatra, Kumar said, “All the rituals of the festival have so far been completed on time and we hope tomorrow’s rituals will also be conducted smoothly.”

All the entry points into Puri will remain closed. People are urged to stay indoors and witness the Bahuda Yatra on television, said district collector, Balwant Singh.

He further said that temporary arrangements have been made at five to six places to hold ‘Bhajans’ during the Yatra tomorrow.

The Bahuda Yatra of Lord Balabhadra, Lord Jagannath, and Devi Subhadra, often called as return Car Festival will be held tomorrow amid strict restrictions in place in the wake of COVID-19 pandemic just like during the Gundicha Yatra.

Odisha Unlock 2.0: Schools & Colleges To Remain Shut Till August 31, Night Curfew From 9 PM To 5 AM