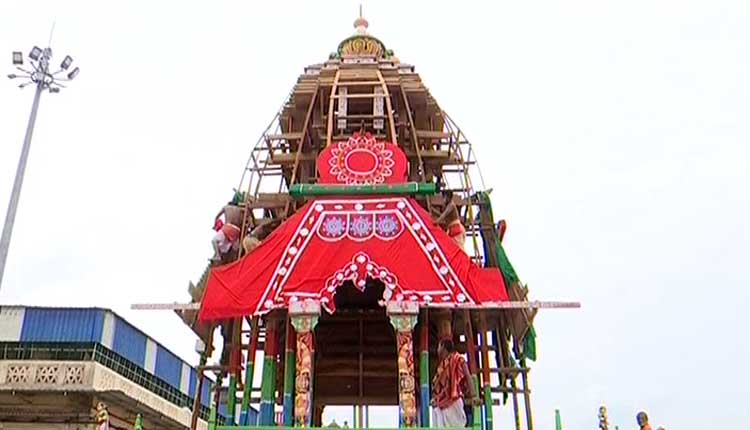 Bhubaneswar/Puri: The order of the Supreme Court of India to stall the chariots of the Lord Jagannath & his sibling deities from rolling this year has led to deeper scrutiny into the reasons as to why after so much preparations, the grand festival, which is inextricably linked to the faith & sentiments of crores of people, was stopped.

A document of Puri Jagannath Temple Managing Committee dated May 30, which is in possession of OTV, shows that the committee gave a unanimous proposal to Odisha government to conduct of Rath Yatra to uphold the belief of millions of devotees across the world and keep the centuries-old tradition intact.

The committee had proposed various measures from ways to conduct the festival without devotees, to the imposition of curfew in Puri during the festival and restricting the number of servitors for the festival to 800-1000. It also suggested that COVID test for all participants and strict adherence to social distancing guidelines during pulling of chariots among other recommendations.

In this context, it is important to note here that the Chief Administrator of Puri Srimandir also wrote a letter to the State Law Department on June 5 to allow the conduct of Rath Yatra in Puri, the abode of the Holy Trinity, if not elsewhere.

However, it is being alleged that the State government did not take any action despite receiving alternative proposals for the conduct of Rath Yatra. On the other hand, even though the government did not formally give any green signal for the festival, approvals were accorded for all preparations from the construction of chariots to performance of rituals like Snana Yatra. This, many believe was the smokescreen created by the government to prevent any fingers from being pointed at its intent & commitment towards the festival.

Senior counsel Harish Salve representing Odisha government in the Supreme Court in the matter concerning the conduct of Rath Yatra was silent on aspects like full-preparedness for the festival, proposals of the temple managing committee and most important of all, proposal to perform Rath Yatra without devotees. Instead, it is being said that the court was misled with the fact that around 10 to 15 lakh devotees would congregate for the festival.

Even Puri Gajapati Dibyasingha Deb too corroborated about it on Friday saying that the proposals of Shree Jagannath Temple Managing Committee and the Chhatisa Nijog that Rath Yatra in Puri should be organised without devotees was not presented before the Supreme Court.

Supreme Court’s interim order is based on fact that there will be 10-12 lakh congregation, however, Puri temple managing committee had proposed Rath Yatra without devotees, and this fact was not presented before the apex court by the #Odisha govt: Puri Gajapati Dibyasingha Deb pic.twitter.com/WC8Cc9GK5R

Soon after the SC ruling, the State Cabinet approved a proposal to comply with the interim verdict passed by the apex court and asked the temple managing committee to lay out an alternative roadmap for the conduct of the festival inside the 12th-century shrine. What is interesting here is that the Supreme Court order had no mention of the conduct of Rath Yatra rituals inside the temple premises.

The row over the cancellation of Rath Yatra has roiled the political discourse with Odisha Congress MLA Suresh Routray once again pointing fingers at the State government and questioning it for not taking proactive action in conducting the festival.

Routray criticised that Odisha government heartily agreed to organise Bande Utkala Janani chorus by gathering hundreds of people outside Srimandir a few weeks ago, but it did not make any sincere attempts for the conduct of Rath Yatra.

The veteran leader also blamed the government for not presenting the proposals of Shree Jagannath Temple Managing Committee and the Chhatisa Nijog before the Supreme Court on holding Rath Yatra without devotees.

He also demanded that since there are 3 more days left to the Rath Yatra, the government should quickly approach the apex court and request it to reconsider its decision.

State Congress chief Niranjan Patnaik too came down heavily on the government for taking such a long time in deciding to conduct or cancel the Rath Yatra festival altogether.

Out of fear, #Odisha govt failed to take a decision on holding #RathYatra, alleges State Congress chief Niranjan Patnaik; says, “It would be better, if govt holds the festival by clamping shutdown in the city #RathYatraCancelled pic.twitter.com/rWJuxCTGhN

Only Odisha government knows why there was a delay in decision making. It seems that the State government failed to take the decision because of apprehensions pertaining to the COVID-19 pandemic. Cannot say what others would have done if they were in charge

BJP leader Kharavela Swain said, “There will be a great loss in the country if Rath Yatra is organised as several key events including IPL and Olympics have been cancelled.”

#RathYatra shouldn’t be held this year as per SC’s decision; both Centre & #Odisha govt don’t want to take responsibility; views of Srimandir managing committee assume no importance; but some people are hell-bent to conduct the festival for vested interests: BJP’s Kharavela Swain pic.twitter.com/OszpzU0JLs

Responding to the allegations of Congress, ruling-BJD leader Prafulla Ghadei said, “After Supreme Court’s verdict, nobody should have any say as the apex court’s ruling is the law of the land.”

Ghadei further stated that everybody should wait for the next order of the Supreme Court as some modification petitions have been filed.

On Puri Gajapati Maharaj’s statements that Odisha government did not present the proposals of Shree Jagannath Managing Committee before the Supreme Court, Ghadei said, “I have nothing to say on who is saying what; rather we should wait on what the Supreme Court will decide.”