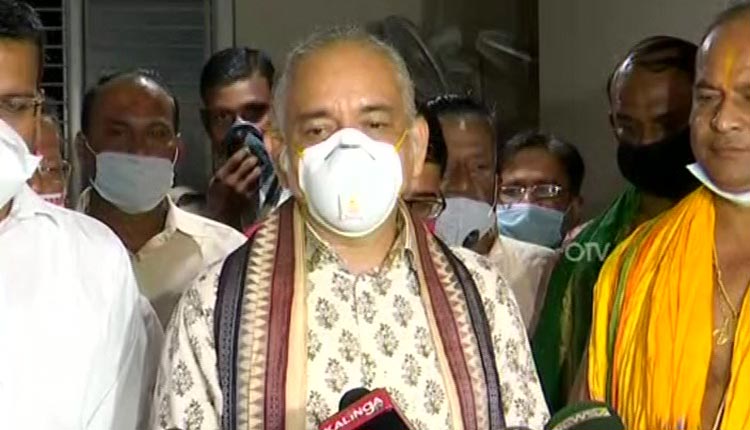 Bhubaneswar: The proposals of Shree Jagannath Temple Managing Committee and the Chhatisa Nijog that Rath Yatra in Puri should be organised without devotees was not presented before the Supreme Court, said Puri Gajapati Maharaj Dibyasingha Deb today.

After the crucial meeting of the Chhatisa Nijog and the temple managing committee held this evening, Gajapati Maharaj informed that the interim order issued by the Supreme Court cancelling this year’s Rath Yatra was based on a single fact and apprehension that there would be a congregation of 10 to 12 lakh devotees.

“The proposal of the managing committee was to hold Rath Yatra without devotees and the festival should not be stopped. We had all hopes that Rath Yatra will be organised, but things changed after Supreme Court’s order yesterday,” said Dibyasingha Deb.

Gajapati Maharaj further stated that we all wanted Rath Yatra to be held and the facts which were presented before the Supreme Court that there would be a congregation of 10 to 12 lakh devotees was not the proposal of the managing committee. Rather the committee had proposed to conduct Rath Yatra without devotees and for some reasons it was not accepted by State government and was not presented before the Supreme Court, he added.

Responding to a media query on why managing committee lawyer did not present such facts before the Supreme Court, Gajapati Maharaj clarified that “As per the temple legislation, managing committee is bound to follow the directive of the State government. When the State government said that there would be a congregation of 10 to 12 lakh devotees, there was no question of countering it by our lawyer.”

Dibyasingha Deb further stated that Odisha government had appointed a senior advocate and it was State government’s responsibility to convince Supreme Court that there would no problem if Rath Yatra was organised during the COVID-19 pandemic.

“The matter is sub- judice in Supreme Court and we will wait till Monday for necessary directive as petitions to modify the order have been filed. We urge State government to take necessary steps to get the interim order of the Supreme Court modified so that Rath Yatra is organised as per COVID-19 guidelines,” he added.

It was the unanimous opinion in the meeting that if on Monday we do not get a favourable modification in the order and Rath Yatra remains cancelled, then only the Chhatisa Nijog members will take a decision on what rituals can be conducted in that case.

Supreme Court’s interim order is based on fact that there will be 10-12 lakh congregation, however, Puri temple managing committee had proposed Rath Yatra without devotees, and this fact was not presented before the apex court by the #Odisha govt: Puri Gajapati Dibyasingha Deb pic.twitter.com/WC8Cc9GK5R