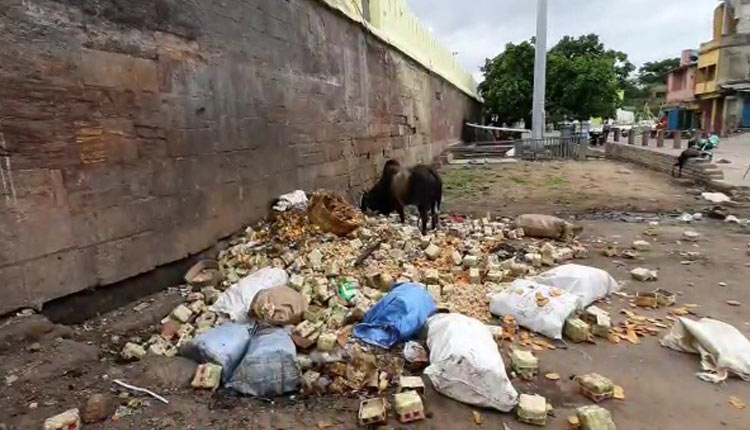 Puri: It was a shocking image for lakhs of Jagannath devotees after ‘Sukhili Bhoga (dry prasad)’ weighing quintals was found dumped in a drain adjacent to the Meghanada Pacheri, the boundary wall of the temple.

Much to the chagrin of devotees, huge amount of dry prasad including ‘Mitha Feni,’ ‘Khaja’ and ‘Jagannath Ballabh’ that are not only relished by devotees, but is savoured by the Holy Trinity were found dumped in the drain.

Some may cite COVID-19 induced shutdown as the possible reason as lack of demand has resulted in wastage; but as per the Srimandir tradition, the excess prasad, be it Mahaprasad or Sukhili Bhog, should be buried underneath the soil. Some people even argue that the Sukhili Bhog could have been distributed among the poor instead of dumping it in the drain.

Locals of Puri alleged that, at a time when millions of Jagannath devotees are barred from the darshan of the Holy Trinity and the daily Mahaprasad is out of bounds for them, the dumping of Sukhili Bhog and that too in a drain is a direct assault on the devotees’ sentiments.

“This is a direct insult of the Lord as well as his devotees. We are deeply hurt by this act,” a devotee said.

President of the devotees’ council, Surya Narayan Rath said, “I request the Shree Jagannath Temple Administration and the district administration to remove the prasad from here.”

Even the Suara and Maha Suara Nijog in Srimandir condemned the act. “The quantity of prasad should be reduced in order to limit wastage. The excess Bhog should be distributed among the poor,” said Kalia Pratihari, President of the Nijog.

Rituals administrator of SJTA, Jitendra Sahu said, “It is wrong to throw prasad like the way it has been done. We will launch a probe into the matter and appropriate steps will be taken after inquiry.”