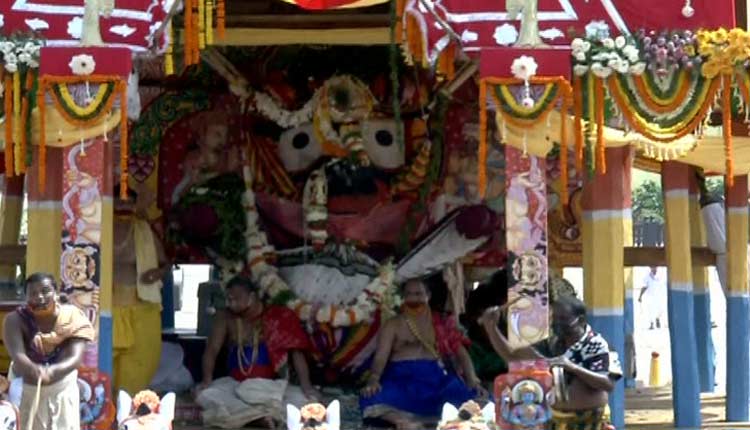 Bhubaneswar: Uncertainty had loomed large over Puri Rath Yatra till Monday evening when Supreme Court finally gave nod for the festival with certain conditions paving way for the chariots of the Holy Trinity to roll on the Badadanda (Grand Road) on Tuesday. Barely a day has passed and political parties in Odisha have locked themselves in a battle to take credit for the same.

The main Opposition party in Odisha, BJP today claimed that the Puri Rath Yatra was possible due to the efforts of Prime Minister Narendra Modi and Home Minister Amit Shah. The State unit of BJP also alleged that the Odisha government conspired to stop the festival and had made secret arrangements with the petitioners who had moved the apex court seeking cancellation of the festival.

“Odisha government, through the petitioners, had told the SC that 10-12 lakh people will congregate during Rath Yatra and it can’t control it. On what basis, the government made that calculation. It was a conspiracy,” alleged BJP State general secretary, Lekhashree Samantasinghar.

Only after the intervention of PM Modi and Amit Shah, a solution to hold the Rath Yatra originated, she added.

Without commenting on BJP’s allegations, BJD general secretary Sanjay Das Burma said,” Following the guidelines of the SC, Rath Yatra was conducted and I pray Mahaprabhu Jagannath for the smooth conduct of all the rituals ahead.”

Odisha Congress chief Niranjan Patnaik lashed out at both the Centre and the State and said, “Neither the BJP nor the BJD wanted to hold Rath Yatra. Now, they are just indulging in gimmicks to take credit.”

However, servitors of the Puri Srimandir gave credit to Lord Jagannath for the Rath Yatra.  “Without the consent of the almighty nothing happens. There is no role of any political party as all were silent on the matter. Devotees prayed before the Lord, who listened to their prayers,” said senior servitor, Rabi Narayan Mohapatra.