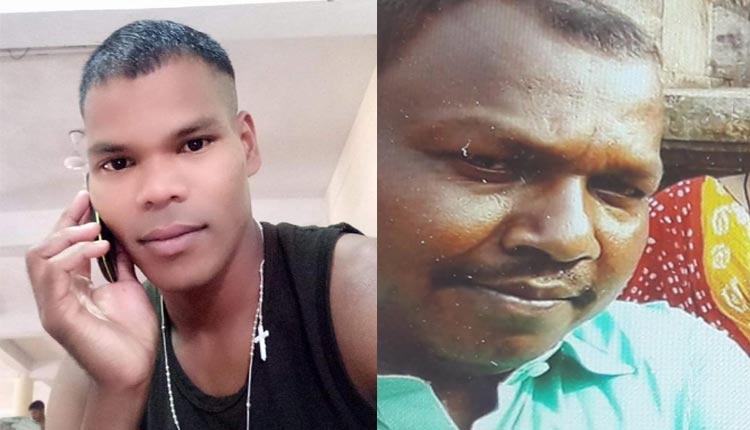 Bhubaneswar: Two soldiers from Odisha were among the 20 Indian army personnel who were martyred in the violent clash with Chinese troops in Galwan Valley along the Line of Actual Control (LAC) in eastern Ladakh on Monday night, as per family sources. However, official confirmation is awaited.

The two Odia jawans have been identified as Chandrakant Pradhan from Biarpanga village under Raikia block of Kandhamal district and Nuduram Soren from Rairangpur of Mayurbhanj district.

#BREAKING #indiachinastandoff: 2 jawans from #Odisha, Chandrakant Pradhan (left) from Biarpanga in Kandhamal district & Nanduram Soren from Rairangpur among the 20 martyred soldiers who lost their lives in Ladakh’s Galwan Valley pic.twitter.com/sHxmMMSUCE

“We were informed about the martyrdom of our son by Subedar DC Pradhan and the news has devastated us,” informed father of Chandrakant Pradhan, one of the two jawans from Odisha.

They said that my son is no more!

Crestfallen parents of Chandrakant Pradhan, one of the two #Odisha jawans who were martyred during standoff with Chinese troops in Ladakh’s Galwan Valley#IndiaChinaFaceOff pic.twitter.com/IoYkcdFvqo

According to reports, Pradhan was posted as Sepoy  in 16 Bihar regiment and survived by his parents and three siblings.

Similarly, Soren had joined the Indian army in 1997 and was posted as Naib Subedar in 16 Bihar regiment. He is survived by his wife Laxmi Majhi and three daughters- Ganeswari, Manasi and Sonali.

Odisha Chief Minister Naveen Patnaik on Wednesday paid tributes to the 20 Indian Army personnel who were martyred in Galwan Valley clash and said they have made the supreme sacrifice protecting the integrity of the nation.

“Join the nation to salute the bravehearts of #IndianArmy who made the supreme sacrifice at #GalwanValley, protecting the integrity of our nation. Deepest condolences to the families of the brave martyrs,” tweeted Patnaik.

Join the nation to salute the bravehearts of #IndianArmy who made the supreme sacrifice at #GalwanValley, protecting the integrity of our nation. Deepest condolences to the families of the brave martyrs.

BJP national vice-president and former MP, Baijayant Panda said it is important for all Indians to stand united to back the armed forces.

Short video on the face off with China along the #LAC in eastern #Ladakh that has seen the first casualties in several decades. It is important for all Indians to stand united as one to back our armed forces. Jai Hind 🙏#PandaTalks 5 pic.twitter.com/2MC5yoDSgc

“The loss of soldiers in Galwan is deeply disturbing and painful. Our soldiers displayed exemplary courage and valour in the line of duty and sacrificed their lives in the highest traditions of the Indian Army,” tweeted Defence Minister Rajnath Singh.

The Nation will never forget their bravery and sacrifice. My heart goes out to the families of the fallen soldiers. The nation stand shoulder to shoulder with them in this difficult hour. We are proud of the bravery and courage of India’s breavehearts.

Salute and deepest respect to the soldiers who sacrificed their lives to protect our country in the Galwan Valley. NO one is more selfless and brave than a soldier. Sincere condolences to the families. I hope they find peace through our prayers at this difficult time. 🙏

Twenty Indian Army personnel, including a colonel, were martyred in the clash with Chinese troops along the LAC in Galwan Valley on Monday night, the biggest military confrontation in over five decades that has significantly escalated the already volatile border standoff in the region.

The Indian Army initially said on Tuesday that an officer and two soldiers lost their lives. But in a late evening statement, it revised the figure to 20, saying 17 others who “were critically injured in the line of duty and exposed to sub-zero temperatures at the standoff location succumbed to their injuries”. 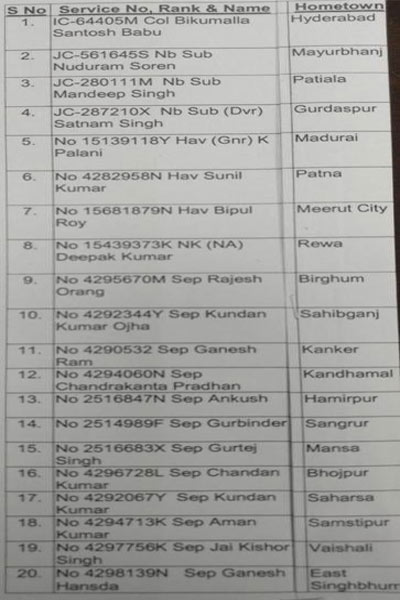 Death of one of the two Odisha jawans who were martyred during the standoff with Chinese troops in Ladakh’s Galwan Valley, stunned his ageing parents.

They said that my son is no more!

Crestfallen parents of Chandrakant Pradhan, one of the two #Odisha jawans who were martyred during standoff with Chinese troops in Ladakh’s Galwan Valley#IndiaChinaFaceOff pic.twitter.com/IoYkcdFvqo

Government sources said the Chinese side too suffered “proportionate casualties” but chose not to speculate on the number.

It is the biggest confrontation between the two militaries after their 1967 clashes in Nathu La when India lost around 80 soldiers while over 300 Chinese army personnel were killed in the confrontation.

The clashes happened on Chinese side & we ask India to strictly discipline its frontline troops, stop infringing & provocative activity at once, work with China & come back to the right track of resolving the differences through dialogue & talk

On the other hand, Ministry of External Affairs spokesperson Anurag Srivastava said the stand-off happened as a result of an attempt by the Chinese side to unilaterally change the status quo in Galwan.

“Both sides suffered casualties that could have been avoided had the agreement at the higher level been scrupulously followed by the Chinese side,” Ministry of External Affairs (MEA) Spokesperson, Anurag Srivastava told the media.

The MEA spokesperson added, “India is very clear that all its activities are always within the Indian side of the LAC. We expect the same from the Chinese side.”

As per Indian army sources, the China’s People’s Liberation Army (PLA) soldiers had attacked a small group of Indian Army soldiers on patrol on Monday night in which they killed three men, including the commanding officer. Then intensity of the violent face-off increased with reinforcements from the both sides and it continued till late night till the time they got exhausted. Many Indian soldiers went missing during the fight.

Following this, both Indian and Chinese top military officials rushed and called for a meeting to defuse the situation the next day.

These are the first casualties faced by the Indian Army in the clash with the PLA since 1975 when an Indian patrol was ambushed by Chinese troops at Tulung La in Arunachal Pradesh.

The Monday night attack took place after Brigade Commander and company level talks happened in Eastern Ladakh between India and China on June 6. The talks were happening near patrolling point 14 near the mouth of the Galwan Valley. (With Agency Inputs)