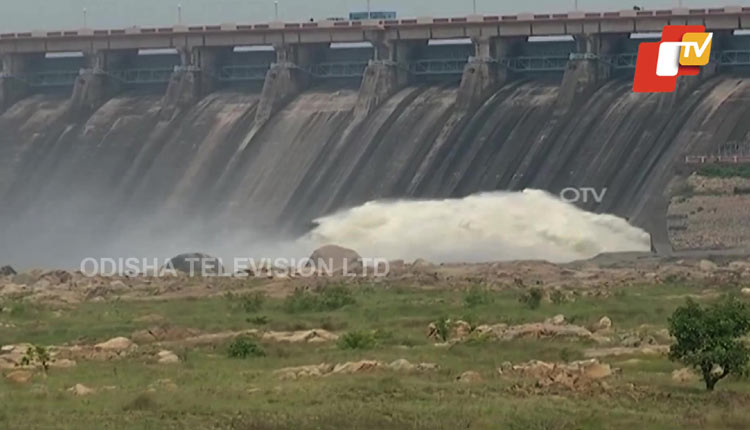 Sambalpur: The Hirakud dam released this season’s first flood water into Mahanadi River on Thursday after water level of the reservoir went up due to good rainfall in the catchment of the dam.

The first floodwater of the season is usually released from Hirakud dam in the month of August. However, as the upper catchment areas of the reservoir has been receiving good amount of rainfall since the onset of monsoon, floodwaters were discharged much before the usual time this year.

The floodwaters were released first through sluice gate 7 of Left Spillway of the dam after conducting ceremonial rituals in the morning today. Later, nine more sluice gates were opened in phased manner to discharge the excessive water.

#UPDATE on floodwater discharge from Hirakud Dam: Authorities of the reservoir inform that a total of 5 sluice gates have been opened to discharge the excess water from the dam.#Odisha pic.twitter.com/sLy6PpINUb

The process began at around 10.05 am today when the water level stood at 618 feet against the full reservoir capacity of 630 feet, said the dam authorities.

The Hirakud Dam has 64 sluice gates including 24 on the right and 40 on the left side of the dam to release floodwater. Each sluice gate has the capacity to discharge 16,440 cusec of water.