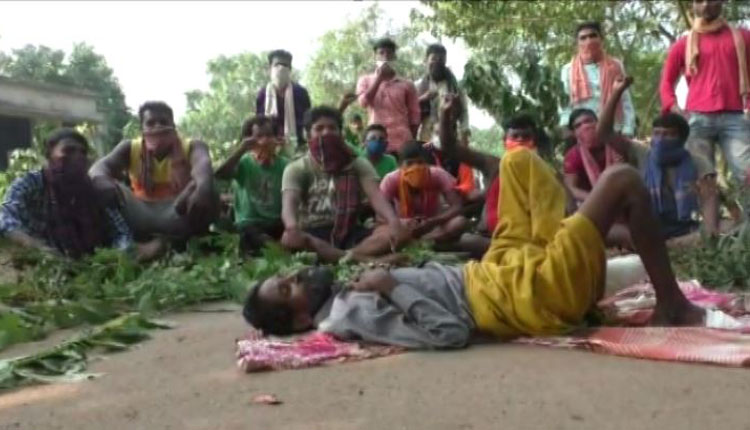 Cuttack: Vehicular movement on the Banki-Baideswar main road was disrupted on Wednesday morning after locals staged a road block near Botalama by making a patient sleep in the middle of the road over alleged medical negligence.

According to sources, one of the villagers had been admitted to the SCB Medical College and Hospital in Cuttack after he developed a wound on his leg. Later, he was discharged from the hospital after receiving treatment.

He used to dress his wound at the Banki hospital. But locals alleged that since past one week doctors at the hospital stopping attending to patients, sources added.

“I was working in Rourkela. But when my health condition worsened, I came back to my village with a hope that I will be with my fellow villagers. I have been suffering from the last six months,” said Naba Dehuri, the patient.

A villager alleged that though Dehuri is in dire need of medical attention, the stopping of work by doctors at the hospital has rendered him helpless. “The man has been suffering from the last six months. There is no one to take care of him. We have been demanding medical assistance for him and have approached the Sarpanch, sub-collectors and many other officials. But, he is yet to get the treatment,” a local alleged.

NIA Picks Up Man From Bhubaneswar, Questioning On At Undisclosed Location