Police seized a huge stock of the adulterated sauce and raw materials used for its’ manufacturing. Acting on a tip-off, the police made a swoop at the unit and confiscated the stock of duplicate ‘chilli sauce’ and ‘tomato sauce’. The owner of the fake manufacturing unit has been detained and her questioning is underway.

It may be recalled that last week the Cuttack Police had busted another duplicate sauce manufacturing unit at the nearby Choudwar. 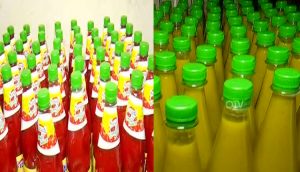 According to sources the fake unit at Jagatpur was using the levelling stickers of ‘Subham Food’ which is located at the Mancheswar Industrial Estate in Bhubaneswar. No manufacturing date has been mentioned in the stickers.

“Following the receipt of the information, the Jagatpur Police raided the illegal manufacturing unit this morning. We have seized the stock of fake products,” stated Assistant Commissioner of Police (ACP), Amarendra Panda. The owner of the unit does not have a license to manufacture these eatables.

Meanwhile, speaking to OTV, the owner of the manufacturing unit claimed that their products were not fakes. “We use boiled potatoes and pumpkins and grind those to prepare the sauce. On the sticker we mention the product/s as vegetable sauce,” she claimed. However, these products were to be sold in retail as ‘Tomato’ and ‘Chilli’ sauce.

“We started the unit just two months back to make an earning which we lost due to the Covid-19 situation. We have applied for the licence, but yet to get it,” she further added.

The back to back raids and recovery of large quantity of spurious and duplicate eatables (and other products) reveals that the millennium city has, of late, become an adulteration hub. Recently, fake honey, gangajal and ghee manufacturing units had been busted in the city.
Read More: