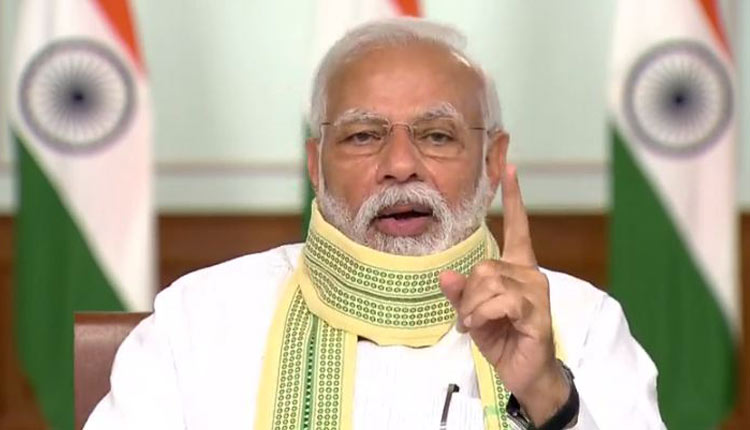 New Delhi: In a strong message to Beijing over the violent face-off in Ladakh’s Galwan Valley that left 20 Indian Army personnel dead, Prime Minister Narendra Modi on Wednesday said India wants peace but is capable of giving a befitting reply if instigated, even as the frontline bases of the army and the air force along the nearly 3,500 km de-facto border with China have been put on high alert.

External Affairs Minister S Jaishankar, in a telephonic conversation with his Chinese counterpart Wang Yi said the “unprecedented” development will have a “serious impact” on the bilateral ties, holding the Chinese army responsible for the violence by taking “premeditated” action.

Chinese Foreign Ministry, which also issued a statement after the conversation between Wang and Jaishankar, said India should “conduct a thorough investigation, hold the violators accountable, strictly discipline the frontline troops and immediately stop all provocative acts to ensure such incidents will not occur again”.

The Chinese statement also said the two sides agreed to “cool down the situation on the ground as soon as possible” and maintain peace and tranquility in the border area in accordance with the agreement reached so far between the two countries.

In his first remarks on the Monday night clash, which is the biggest military confrontation between India and China in over five decades, Modi in his opening remarks at a virtual conference with chief ministers on the coronavirus crisis said India would not “compromise with its integrity and sovereignty” and will firmly defend its self-respect and every inch of land.

Asserting that the sacrifice of the army men will not go in vain, the Prime Minister said, “India is culturally a peace-loving country…We have always worked closely with our neighbours in a cooperative and friendly manner…We never provoke anyone…Whenever the time has come, we have demonstrated our power, proving our capabilities in protecting the integrity and sovereignty of the country.”

During his conversation, Jaishankar also conveyed to Wang that while there was some progress on the situation, the Chinese side sought to erect a structure in Galwan valley on the Indian side of the Line of Actual Control which became the source of dispute.

“While this became a source of dispute, the Chinese side took premeditated and planned action that was directly responsible for the resulting violence and casualties,” the MEA said, giving details of the conversation.

Meanwhile, Defence Minister Rajnath Singh held a high-level meeting with Chief of Defence Staff and three service chiefs following which all the frontline bases of the Indian Army and the Indian Air Force along the nearly 3,500 km de-facto border were put on high alert in view of the clash, military sources said

The Indian Navy has also been asked to raise its alert-level in the Indian Ocean Region where Chinese Navy has been making regular forays.

The sources said the army has rushed in additional troops to all sensitive areas along the Line of Actual Control (LAC) in Arunachal Pradesh, Uttarakhand, Himachal Pradesh and Ladakh, and directed all the frontline bases to deal with any aggressive behaviour by Chinese Army with a “firm” hand.

“The rules of engagement will be different from now onwards,” a top military official told PTI on condition of anonymity.

Military sources said 18 Army personnel injured during Monday night’s clashes were undergoing treatment at a hospital in Leh. Four of them were critically injured, but they are responding to treatment, they added.

Another group of 58 personnel, who sustained minor injuries, have also been kept under medical supervision, the sources said, adding they will be ready to join their units in two weeks time.

The clash in Galwan Valley on Monday night is the biggest confrontation between the two militaries after their 1967 clashes in Nathu La in 1967 when India lost around 80 soldiers while over 300 Chinese army personnel were killed.

In the meantime, the two armies held another round of Major General-level talks during which ways to implement an agreement on disengagement between the two sides in several standoff points were discussed.

In the midst of extensive political reactions to the Galwan Valley clash, the Prime Minister’s Office said Modi has convened an all-party virtual meet on June 19 to discuss the situation on the India-China border.

Leaders from opposition parties asked Modi to give details of the border situation and also how the Chinese occupied Indian territory, and Congress president Sonia Gandhi urged the Prime Minister to come forward and tell why 20 soldiers were killed.

In a video message, Sonia assured the country of her party’s full support to the Indian Army and the government. She asked whether some Indian Army personnel were still missing and how many were seriously injured.

The two armies were engaged in a standoff in Galwan and several other areas of the eastern Ladakh since May 5 when the two sides clashed on the bank of the Pangong Tso.

After the standoff began, the Indian military leadership decided that Indian troops will adopt a firm approach in dealing with the aggressive posturing by the Chinese troops in all disputed areas of Pangong Tso, Galwan Valley, Demchok and Daulat Beg Oldie.

The Chinese Army has been gradually ramping up its strategic reserves in its rear bases near the LAC by rushing in artillery guns, infantry combat vehicles and heavy military equipment.

The road in the Finger area in Pangong Tso is considered crucial for India to carry out patrols. India has already decided not to stall any border infrastructure projects in eastern Ladakh in view of Chinese protests.

The situation in the area deteriorated after around 250 Chinese and Indian soldiers were engaged in a violent face-off on May 5 and 6. The incident in Pangong Tso was followed by a similar incident in north Sikkim on May 9.

Prior to the clashes, both sides have been asserting that pending the final resolution of the boundary issue, it is necessary to maintain peace and tranquillity in the border areas.