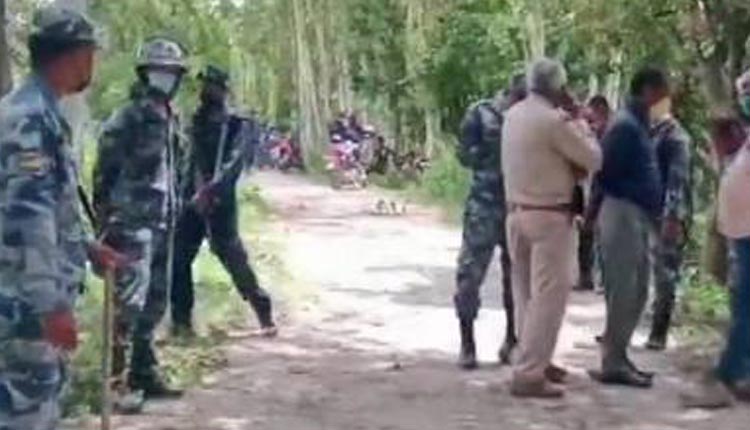 Patna/New Delhi: A man was killed and two others were injured on Friday after Nepal border police troops fired at them “deep inside Nepalese territory” adjoining Bihar’s Sitamarhi district, officials said.

An Indian national, Laagan Yadav (45), has been taken into custody by the Nepal border police, they said.

The situation is normal now and “our local commanders immediately got in touch with our Nepalese counterparts APF”, Chandra said.

Inspector General (IG) of the SSB’s Patna Frontier, Sanjay Kumar, told the news agency that the incident took place between locals and the Armed Police Force (APF) of Nepal.

One person was killed and two others were injured in the firing, the IG said.

Vikesh Yadav (22), who suffered a bullet injury in the abdomen area, has succumbed, while Uday Thakur (24) and Umesh Ram (18) are injured and admitted to a private hospital in Sitamarhi, which is around 85 kilometers from Bihar capital Patna, according to the officials.

There are relations between locals on either side of this border, and as the front is not fenced, people move around to meet their family members, the officials said.

APF personnel objected to this meeting following which there was a heated argument between the two sides and later, about 75-80 Indians gathered at the spot, they said.

The APF has claimed that they first fired in the air to disperse the crowd and fearing snatching of their weapons, they later initiated aimed fire in which three people got hit, the officials said.

The incident area is between Jankinagar of Sitamarhi district and Sarlahi in Nepal, they said.

Senior officials of the local police, administration and the SSB are at the spot, the officials said.

The area is guarded by the 51st battalion of the SSB and it falls under border pillar number 319, they said.

The SSB is tasked to guard the 1,751 km open India-Nepal border.

Meanwhile, Nepal’s Parliament is set to hold a special session on Saturday to vote on a constitutional amendment to come out with a new political map laying claim over the strategically key areas of Lipulekh, Kalapani and Limpiyadhura along the border with India, notwithstanding a strong protest by New Delhi.

A house meeting has been scheduled for Saturday as per the Parliament’s notice and the matter relating to the constitution amendment bill is likely to come during the meeting, parliamentary sources said.

Nepal last month released the revised political and administrative map of the country laying claim over the strategically key areas. India has been maintaining that these three areas belonged to it.

Earlier this week, the Nepalese Parliament unanimously endorsed a proposal to consider the constitution amendment bill to pave way for endorsing the new map.

The ties between India and Nepal came under strain after Defence Minister Rajnath Singh inaugurated a 80-km-long strategically crucial road connecting the Lipulekh pass with Dharchula in Uttarakhand on May 8.

India sternly asked Nepal not to resort to any “artificial enlargement” of territorial claims after Kathmandu released the new map.

Nepal’s Prime Minister K P Sharma Oli has said that his government will seek a solution to the Kalapani issue through diplomatic efforts and dialogue on the basis of historical facts and documents.

“We will get back the land occupied by India through holding a dialogue,” Oli said while responding to questions in Parliament on Wednesday.

He claimed that India built a Kali temple, created “an artificial Kali river” and “encroached the Nepalese territory through deploying the Army” at Kalapani. The river defines the border between the two countries.

In New Delhi, the External Affairs Ministry said on Thursday that India deeply values its friendly ties with Nepal.

“We have already made our position clear on these issues. India deeply values its civilization, cultural and friendly relations with Nepal,” Spokesperson in the Ministry of External Affairs Anurag Srivastava said, in comments seen as conciliatory to the Himalayan nation.

“Our multi-faceted bilateral partnership has expanded and diversified in the recent years with increased focus and enhanced government of India’s assistance on humanitarian, development and connectivity projects in Nepal,” Srivastava said at an online media briefing when asked about the issue.