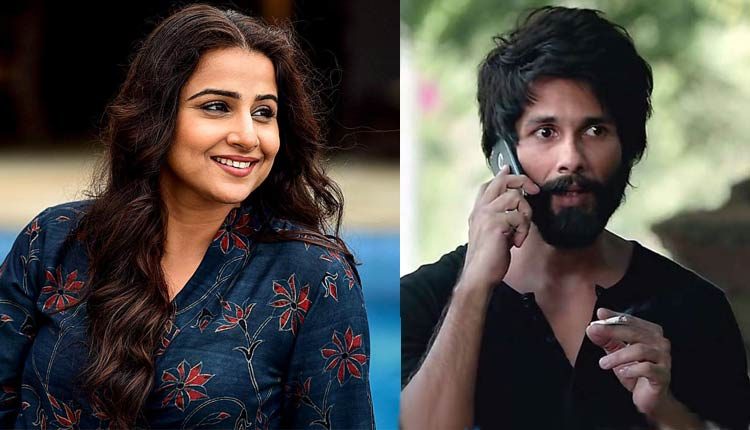 Vidya Balan is one actress who has always loved to do women-centric movies. Be it Dirty Pictures or No One Killed Jessica, all the roles portrayed by the actress were meaningful and showcased a strong woman’s character. Even her debut movie Parineeta opposite Saif Ali Khan revolved around her character and proved that Vidya Balan is a very strong actress.

She is once again in the limelight as her upcoming movie Shakuntala Devi will now be released on OTT due to the pressure caused by the lockdown. Vidya’s short film Natkhat has a North Indian backdrop that has control of masculinity to its core. The movie is a brutal take on the overall scenario of male superiority and how Vidya’s character takes control of her young son’s grooming.

The actress has always been quite open when it comes to criticizing things that are going around her or about any movie that she thinks has not been up to the mark.

Vidya On Reconnecting With Shahid Kapoor After Kabir Singh

Kabir Singh was a big hit of 2019 which also escalated the stardom of Shahid Kapoor. But many criticized the character of Kabir for being misogynist and slammed the movie for such a chauvinistic approach. But Vidya has an entirely different opinion. During one of her interviews recently, the actress said that she liked Kabir Singh very much and even called Shahid Kapoor after that admiring his work.

@balanvidya in an exclusive conversation with Zoom, talks about her film #ShakuntalaDevi and the decision of releasing it on OTT platform which upset exhibitors and created the whole debate about OTT vs Theatres. She talks about misogyny displayed in films and defends #KabirSingh. She also talks about female-centric films and gives the example of #Sridevi who used her name to sell films. She talks about spending quality time with her husband #SiddharthRoyKapur during this lockdown period. She shares why she chose to do the short film #Natkhat and how she never came across a short film with gravity. Check it out

According to the Mission Mangal actress, there are people like Kabir Singh in society and Shahid as an actor was only portraying it. That does not mean as if he was supporting the character’s behaviour. Vidya does believe that if such characters are there then what is wrong in showing them on the big screen? Vidya Balan and Shahid Kapoor were rumoured to be dating each other at the time of their movie Kismet Konnection. Vidya was quite upset by the behaviour of Shahid after the breakup and until now avoided talking about him.

Instagram Tells Users Not To Embed Photos On Other Websites