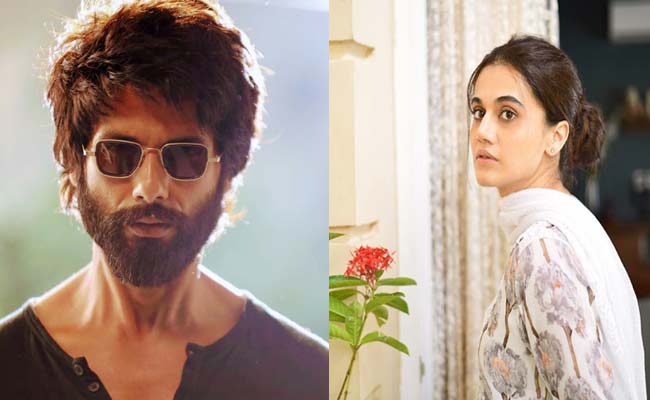 The poster of Taapsee Pannu’s upcoming movie ‘Thappad’ was unveiled recently. The poster shows the actress giving expressions as if she has been slapped by someone. As is evident from the poster this movie helmed by the “Dus” director Anubhav Sinha is about dynamics between a man and a woman and whether there is any space for violence in such a relationship.

Now, this is exactly the opposite of what was shown in the superhit movie of last year “Kabir Singh” starring Kiara Advani and Shahid Kapoor. Directed by Sandeep Reddy Vanga, the remake of a superhit South Indian film portrayed the use of violence and abuse by the lead character when things did not go his way. Now, Taapsee’s movie is questioning the existence and need for such violence in a relationship. The poster in which the hair of the “Saand Ki Aankh” actress is flying across and her face has shrunk as if someone has hit her asks a very relevant question which has been the topic of debate since women became independent.

Is ‘Thappad’ A Reply To ‘Kabir Singh?’

Although the Shahid Kapoor movie placed him in the league of A-listed stars, it also raised many questions. Many slammed it as a toxic love story whereas there were several others who thought it was a highly passionate, emotional romantic story. But the question remained whether violence should be a part of your love life? And many believe that “Thappad” is the answer to “Kabir Singh.”

@taapsee
I like the theme of Thappad. It will definitely be a befitting reply to male chauvinism propogated by movies like Kabir Singh (Arjun Reddy). They eulogized a drunkyard,wayward,arrogant, obsessive male instead of a loving&caring male.

Social media users have welcomed this new poster with some even calling it an antidote of Shahid Kapoor starrer. While throwing light on the storyline of this movie, Taapsee said, “When he discussed Thappad, I immediately decided this was a film I had to do. It has a thought-provoking storyline and deals with a subject that must be addressed in our society. To put it in perspective, looking at what we aim to convey with our film, I can say Thappad is this year’s Pink.”

#Thappad trailer strikes you hard! It’s the response that men like #KabirSingh need to hear! Kudos @anubhavsinha @taapsee this one will echo loud and clear #TaapseePannu #Thappad pic.twitter.com/N47ljTvJ2f

The mix of romance and violence in Kabir Singh received a big response. Will the same audience accept “Thappad” and make it a success? The response to this movie starring Dia Mirza, Ram Kapoor, Manav Kaul, and Ratna Shah Pathak will be an indication whether the Indian society is open enough to discuss and accept such a change.