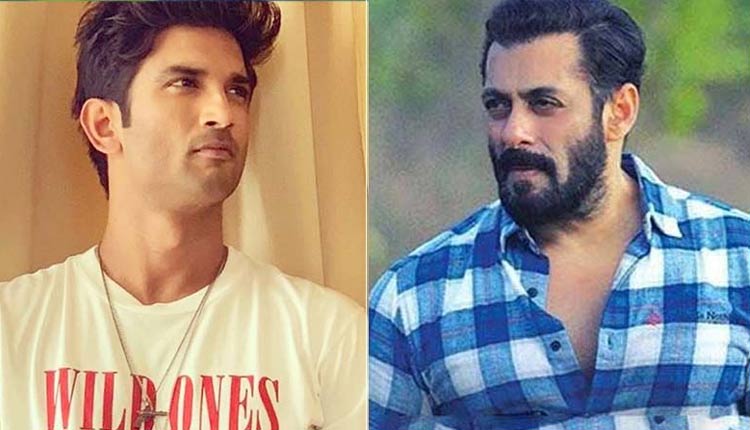 Salman Khan’s name has been repeatedly coming up in the case of Sushant Singh Rajput suicide. Although he never directly worked with the young actor from Bihar there are reports that he at one point in time interfered when Sooraj Pancholi and Sushant had a spat. Yesterday, the Mumbai police even interrogated Reshma Shetty who is the ex-publicist of the Tubelight actor to find out whether there is any connection between Salman and Sushant committing suicide.

Superficially there does not seem to be any connection of Salman with the Kai Po Che actor. But inside reports that are slowly coming out reveal that a few actions by the superstar ultimately affected the mental peace of Sushant Singh Rajput. According to a report, Salman Khan asked the YRF head, Aditya Chopra, to shelve Paani, or else he would withdraw from the mega-projects Sultan and Ek Tha Tiger.

This Criminal #SalmanKhan Snatched #SushantSinghRajput ‘s Most Ambitious Project PAANI From Him.

Sushant Cried For Months After That And It Later Lead Him To Depression.

The leading production house of India had already invested hugely in these two projects and Salman’s withdrawal could have caused a big loss which is why Paani was shelved.

YRF has a tradition of signing young actors for multiple films and introducing them to the film industry. Apart from introducing star kids or actors having Bollywood connections like Arjun Kapoor, Ranveer Singh, and Parineeti Chopra over the years, YRF has also introduced talent from outside which includes Anushka Sharma, Sushant Singh Rajput, and Vaani Kapoor.

For example, Vaani Kapoor was earlier introduced in Shuddh Desi Romance with Sushant Singh Rajput, given a chance in Befikre and also in War. Similarly, Sushant was signed by YRF for three movies out of which he completed Shuddh Desi Romance and Detective Byomkesh Bakshi! The third project was a mega-budget movie titled Paani to be directed by none other than Shekhar Kapur.

But the alleged intervention of Salman Khan forced YRF to shelve this film which was a dream project for Sushant who had left some of the biggest projects like Sanjay Leela Bhansali’s Goliyon Ki Rasleela: Ram Leela and Bajirao Mastani as he was preparing for Paani and wanted to give his best to this big project.

I knew the pain you were going through. I knew the story of the people that let you down so bad that you would weep on my shoulder. I wish Iwas around the last 6 months. I wish you had reached out to me. What happened to you was their Karma. Not yours. #SushantSinghRajput

Even Shekhar Kapur has confirmed that this outsider who rose to fame with Balaji’s Pavitra Rishta serial was utterly broken after this decision of YRF and used to cry on his shoulders. Sushant Singh Rajput was a passionate artist and was known for putting all his heart in his work. After preparing for years for Paani when the film was shelved it caused a big blow to the actor.