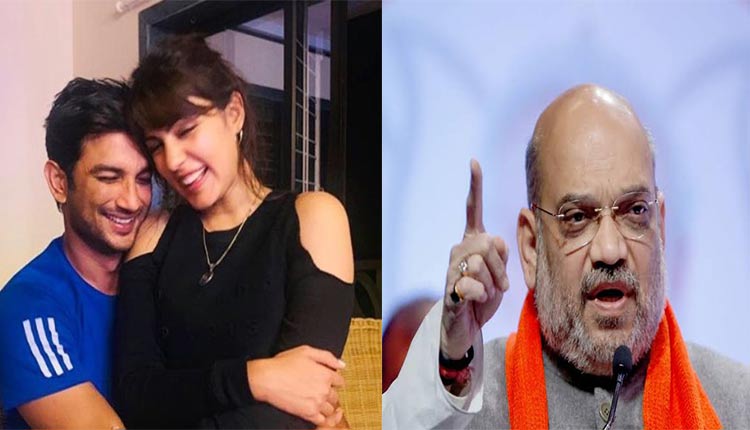 Rhea Chakraborty today surprised everyone by requesting the Home Minister of India Amit Shah to look into the matter of Sushant Singh Rajput’s suicide case and initiate a CBI inquiry. The tweet that came in two parts almost a month after the Dil Bechara actor’s death has made fans wonder whether this sudden change in the approach of the Jalebi actress is because now big names like Amit Shah and Subramanian Swamy are coming into the picture.

Respected @AmitShah sir ,
I’m sushants Singh Rajputs girlfriend Rhea chakraborty,it is now over a month since his sudden demise
I have complete faith in the government, however in the interest of justice , I request you with folded hands to initiate a CBI enquiry..part 1 ..

Part 2.. I request you with folded hands to initiate a CBI enquiry into this matter . I only want to understand what pressures , prompted Sushant to take this step.
Yours sincerely #satyamevajayate @AmitShah sir

Fans Have No Faith In Rhea Chakraborty

Right from the beginning the actress who now calls herself a girlfriend of Sushant has tried to establish that her alleged boyfriend was in severe depression and was taking treatment for it. Even during her 11-hour interrogation, the actress made sure to stress the fact that she left Sushant a few days before the suicide because he was not behaving rationally. All through the month when fans, supporters, and even film actors, politicians kept on demanding a CBI inquiry into the case of the Kedarnath actor citing foul play, Rhea kept mum and even turned off her comment section on social media account.

Rumors were adrift that Rhea was acting on the directions of Mahesh Bhatt who had earlier made comments related to Sushant Singh Rajput’s mental state. That is why fans are not surprised at the sudden change in Rhea’s approach and many even believe that it is all fake and an attempt to hog limelight now that big political names are a part of it. Fans have also slammed Rhea for calling Sushant’s death a suicide as they believe it to be a murder.

He did not take this step .He was murdered As he did not commit suicide .#CBIForSSRHomicideCase pic.twitter.com/i9fuHwH9Xn

Don’t make it feel like suicide we all know he was killed .
If u are his gf why did u delete his all PicZ from ua instagram profile?? U denied when he was alive that ua in relationship with him? Why now ua accepting it when he is no more?? ❓❔❓

And for god sake atleast now stand by his side for him, instead of doing this.
Stand for him with fair intentions n don’t talk rubbish. He was killed he dint take his life.#SSRCaseIsNotsuicide

Wow you’re playing a victim card now rhea Chakraborty, who tell you to do this after a month…. #CBIForSSRHomicideCase pic.twitter.com/gdtVF7FjsY

Is It Fear Or Greed That Is Behind Rhea’s Current Action?

Earlier Subramanian Swamy, the senior political leader of BJP wrote a letter to the Prime Minister of India requesting CBI inquiry in Sushant’s case. In his letter, the MP has clearly said that the findings of his lawyer indicate that this particular case should be probed by CBI as he believes that big names in Bollywood connected to the underworld are pressurizing the Mumbai police.

So is it the fear of Bollywood’s bigwigs and their connection or greed that has triggered this sudden action from Rhea?