Anushka Sharma Super-thrilled With Virat Kohli-Led RCB’s Win Over MI: Too Exciting a Game for a Pregnant Lady’

Anushka Sharma was super thrilled after the Virat Kohli-led RCB team won against Mumbai Indians last night in IPL 2020 match. In what can be said as a nail-biting finish, the face-off between the two teams turned super exciting when it extended till the Super Over. Virat Kohli finished the match by hitting a boundary on the last ball ensuring that his team scores a win over Rohit Sharma-led MI.

Anushka who is currently with Virat in UAE took to Instagram and penned, “Phew! Too exciting a game for a pregnant lady! What a team this one!” The actress even shared photos of the happy winning team celebrating their success.

A few days ago comment by Sunil Gavaskar on the actress triggered controversy. Importantly, even Anushka did not like the way the former Indian cricketer took a jibe at her husband taking her name.

She was very much offended by the distasteful comment and wrote on social media, “I’m sure you can have many other words and sentences in your mind to use to comment on my husband’s performance from last night or are your words only relevant if you use my name in the process? It’s 2020 and things still don’t change for me. When will I stop getting dragged into cricket and stop being used to pass sweeping statements?”

Later on, Sunil Gavaskar explained that he never meant to make any sexist comment and have always supported wives and families of Indian cricketers.

The Sultan actress dedicated an Instagram story today to her movie Sui Dhaaga as it completes two years. She shared a few BTS videos and stills from the flick that also shows her co-star Varun Dhawan. You can hear the title song of the film sung by Divya Kumar running in the background. The Ae Dil Hai Mushkil actress revealed how this gratifying tale is very close to her heart due to its deep roots and authenticity. 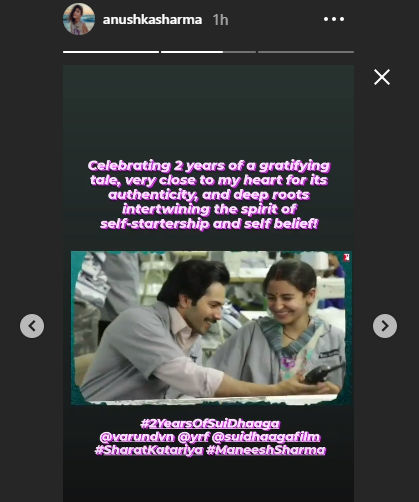 Anushka Sharma was last seen in Zero with Shah Rukh Khan which tanked at the box-office. While there were rumors about the actress joining the team of Prabhas’ Adipurush as the female lead, there has been no confirmation from either the actress or the team of Adipurush.

Anushka is pregnant with her delivery scheduled around January next year.