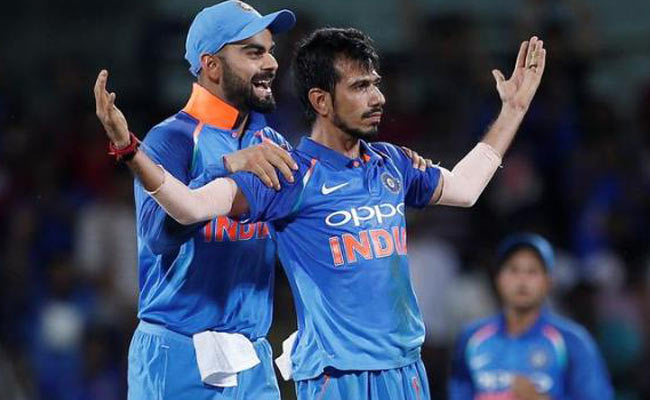 Mumbai: With the coronavirus outbreaks bringing life to a standstill, sportspersons across the globe are also home as sporting events have either been cancelled or suspended. And last week India skipper Virat Kohlis actress wife Anushka Sharma posted a video with the batsman which went viral and leg-spinner Yuzvendra Chahal has joined in the fun.

To which, a not-so-amused Virat responds by shaking his head in disapproval.

Anushka captioned the clip: “I thought he must be missing being on the field. Along with the love he gets from millions of fans, he must be especially missing this one particular type of fan too. So I gave him the experience.”

I thought he must be missing being on the field. Along with the love he gets from millions of fans, he must be especially missing this one particular type of fan too. So I gave him the experience ???

Replying to that post from Anushka, Chahal wrote: “Next time bhabhi please say chahal ok opening Kara na chahal ko I wish aapki sun le (Please ask him to make me open next time, maybe he will listen to you).”

Kohli and Anushka have been vocal about following the guidelines of the government in the fight against the pandemic even as the India skipper also revealed in a recent Instagram live with Kevin Pietersen that this was the longest that he has been with Anushka since their marriage.

Meanwhile, the Indian leg-spinner has revealed that when it comes to marriage, he might just spring a surprise.

Chahal’s contention came recently when he was engaged in an online interactive session with actress Zaara Yesmin.

During the chat, the two discussed everything from how they are spending their lockdown days at home, to discussing their lives. Chahal entertained fans with the freewheeling chat he had with Zaara.

At one point, Zaara asked the bowling star about his marriage plans.

“I don’t know, it might be a surprise for everyone,” he quipped.

A few days back, Chahal said that he is so tired of staying at home during the lockdown that he will never come back once it is lifted. Chahal, like all other cricketers, has been at his residence since the lockdown was put in place from March 25 to deal with the coronavirus pandemic.

He has since been on social media on a number of occasions such as in his own tiktok videos with his families, Instagram lives with his team mates or even gatecrashing live videos of other cricketers.

“Main apne ghar se lockdown ho jaunga (I will get lock-downed from my home), I will not come back to my home, that’s it for me…I can’t take this anymore, can’t stay at home for longer now. These days of staying at home will suffice for the next three years now,” Chahal told television presenter Jatin Sapru.

“I will live in a nearby hotel but will not stay at home, that’s it for me now, can’t bear anymore lockdown days.”

Chahal admitted that his complaint now is the lack of cricket, whereas earlier it was that the players were getting little down time between matches and series.

“I am going to the ground, I really want to bowl. When there is a lot of cricket to play we say ‘there is so much going on’ but we start missing it when there is no action. You will be good when you go to the ground, I miss bowling, I am what I am because of cricket only. I will surely go and bowl at least a ball on the day lockdown gets over,” he said.