The Alia Bhatt Ranbir Kapoor pair looks adorable whenever they are together. The way they hold each other’s hands, care and look deep into each other’s eyes speak volumes of their feelings. And that is why whenever Ranbir and Alia step out even for a casual occasion it makes news. From award functions to birthdays, […]

The Alia Bhatt Ranbir Kapoor pair looks adorable whenever they are together. The way they hold each other's hands, care and look deep into each other's eyes speak volumes of their feelings. And that is why whenever Ranbir and Alia step out even for a casual occasion it makes news.

From award functions to birthdays, promotional events, and visiting close friends, both of them look very comfortable in each other's company wherever they go.

The two started dating after signing the supernatural drama Brahmastra helmed by Ranbir's closest friend Ayan Mukerjee. They continued to dodge the question of being in a relationship initially. Finally, they sort of confirmed the obvious by making an appearance together at the wedding reception of Sonam Kapoor in May 2018.

For Alia, it was a big step who at the age of 11 was so shy that she dreaded putting her head on the shoulder of Ranbir during photo shoot. But ever since then the couple has been constantly setting couple goals. Paparazzi could not stop clicking when the pair surprised everyone by entering hand-in-hand at the Ganesh Festival Celebration of the Ambanis.

While Ranbir looked dapper in kurta and Nehru jacket, it was Alia's rare saree look that caught media attention. Alia Bhatt Ranbir Kapoor became the cynosure of every eye present around as Ranbir very carefully prevented Alia from tripping.

Fans were simply overwhelmed seeing their favorite couple together and simply could not stop raving about them. 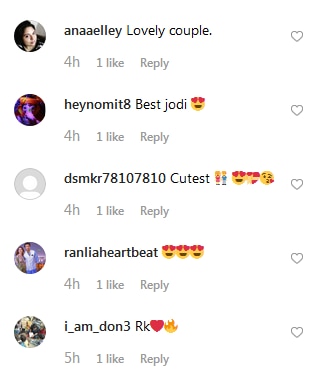 Alia and Ranbir Started Living Together During Lockdown

The couple started living together when the Indian Government announced lockdown. Dressed in casuals media spotted Alia Bhatt Ranbir Kapoor taking a stroll in the compound with a dog.

Alia has been strong support for Ranbir and the Kapoor family after the death of Rishi Kapoor. She is now an integral part of the Kapoor household participating in their every function from Raksha Bandhan to birthdays.

Alia Bhatt Ranbir Kapoor together indeed look very much in love with each other. And fans are hoping that they get to see the same chemistry when these two actors share the screen for Brahmastra.

Also Read: Alia Bhatt continues to attract big projects despite back to back flop