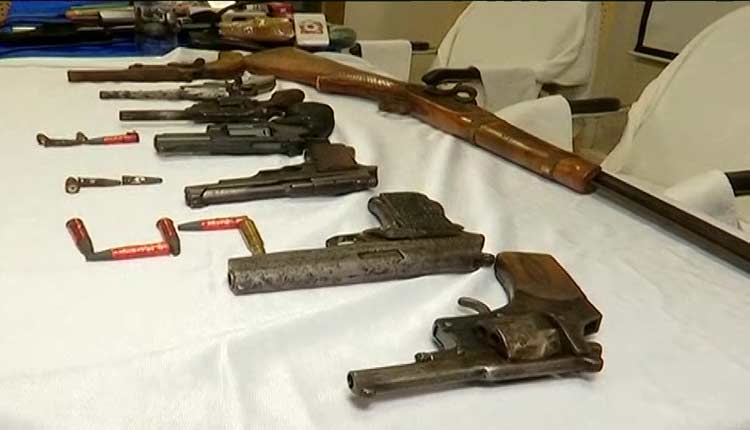 Bhubaneswar: Ahead of the festive season, the Special Task Force (STF) of the Odisha Police Crime Branch busted an illegal weapon-supply racket on Friday by arresting two dealers from the outskirts of Bhubaneswar.

Eight firearms including two pistols, five revolvers (country-made) and a rifle and 12 rounds of live ammunition were seized from the two accused- Rakesh Jena and Bikash Behera.

While addressing a presser, Crime Branch ADG, Soumendra Priyadarshi today said both the arms dealers were arrested following raids at Chandaka and nearby areas on the outskirts of Bhubaneswar.

“It is a major success for STF as we have managed to nab the arms dealers who used to supply the weapons to the criminals,” said Priyadarshi.

According to Priyadarshi, illegal firearms are mostly smuggled from Bihar and others are manufactured locally. The cost of a mauser ranges between Rs 30,000 to Rs 35,000 and efforts are on to ascertain the source of supply of the weapons, the senior official said.

“We will bring both the accused on remand so that more information regarding the illegal arms trade can be elicited,” Priyadarshi added.

On September 25, the STF had seized one 9 MM pistol, one magazine and four rounds of live ammunitions near Kalpana square in Bhubaneswar. Three criminals were arrested in this connection after a case was registered at Badgada Police Station in Bhubaneswar.