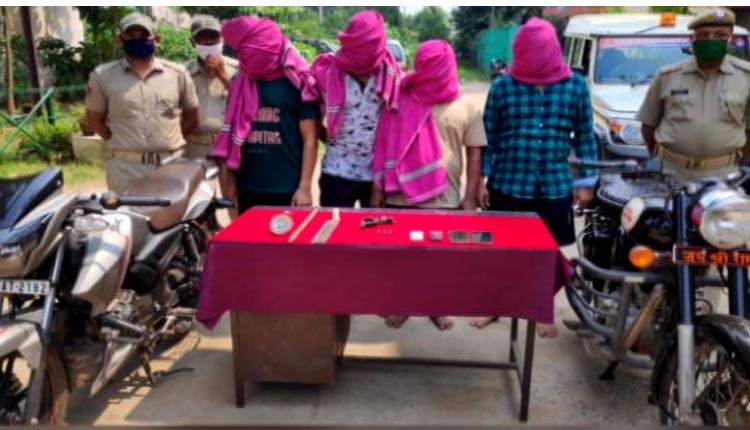 Cuttack: The Commissionerate Police foiled a dacoity bid at a petrol pump and arrested four persons in this connection from Chauliaganj area here.

According to sources, the four accused were hatching a plan to loot a petrol pump on National Highway when the police conducted a raid and arrested them.

Police have seized a gun, sharp weapons, three rounds of bullet, two bikes and mobile phones from their possession.

The accused are the associates of Kendrapada’s dreaded criminal Tito and a series of criminal cases including homicide, attempt to murder, dacoity, loot and extortion are pending against them.

Notably, crimes in the Twin Cities of Cuttack and Bhubaneswar are on the rise despite enforcement of a strict 14-day lockdown in view of surging Covid-19 cases. On Monday, miscreants looted a gold chain after attacking an elderly woman inside her house at IRC village in Bhubaneswar. This is the second time in the past 48 hours that miscreants have executed such robberies with women mostly being the victims.

Earlier on Sunday, robbers had looted a gold chain, a pair of earrings and bangles from Tanuja Mohanty, who works as a DSP in Vigilance department. The miscreants barged into Mohanty’s house located at Unit-3 area under Kharavela Nagar police limits, while she was busy with some household works.

Vigilance DSP Looted Of Gold Ornaments At Gunpoint In Bhubaneswar