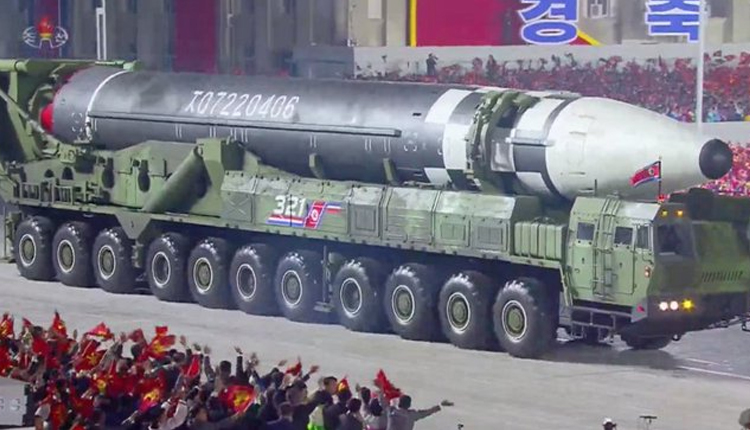 Seoul: North Korea displayed a new intercontinental ballistic missile (ICBM) and other weapons during a massive military parade to mark the 75th founding anniversary of the ruling Workers’ Party, state-media reported on Sunday.

Besides the night-time parade on Saturday, there was also fireworks display, a car parade and other celebratory events to mark the occassion, Pyongyang’s Korean Central News Agency said in a report.

The new ICBM was carried on a transporter erector launcher (TEL) with 22 wheels, indicating that it is longer than the Hwasong-15, which is carried by a 18-wheel TEL, Yonhap News Agency quoted the KCNA report as saying.

The Hwasong-15 has an estimated range of 12,874 kn, which is capable of striking any part of the continental U.S.

The regime has two more types of ICBM: the Hwasong-13 that can fly as far as 5,500 km, and the Hwasong-14 missile with an estimated range of 10,058 km, which is capable of reaching most of the continental U.S.

Also during the parade which was the first since 2018, the country also showed off a new type of submarine-launched ballistic missile (SLBM), which it labelled as the Pukguksong-4, the KCNA report said.

The Pukguksong-3 is classified as a medium-range missile, and is believed to be an upgraded version of its Pukguksong-1 missile.

The country also presented its version of Russia’s Iskander short-range ballistic missile and super-large multiple rocket launchers, which it has test-launched several times since 2019.

Kim stressed that war deterrent is purely for self-defence, and “will never be abused or used as a means for pre-emptive strike”.

“But, if, and if, any forces infringe upon the security of our state and attempt to have recourse to military force against us, I will enlist all our most powerful offensive strength in advance to punish them,” he added.

Kim also apologized to his people for their suffering from multiple challenges, including recent typhoons and flooding and the impact from its anti-pandemic campaign.