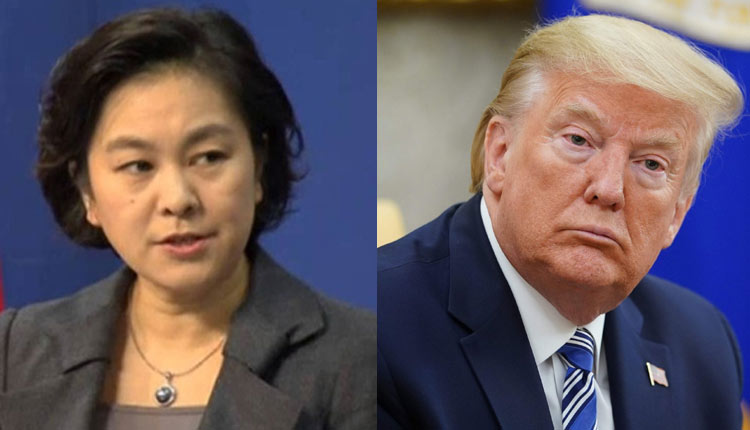 Beijing: China on Wednesday warned the US that it will definitely hit back with sanctions if Washington goes ahead with the implementation of President Donald Trump’s ‘Hong Kong Autonomy Act’ to end the preferential treatment to the former British colony.

President Trump has signed an executive order to end the preferential economic treatment for Hong Kong after China introduced a controversial national security law in the Asian trading hub to curb autonomy and democratic freedoms.

Reacting to Trump’s announcement of signing the ‘Hong Kong Autonomy Act’, Chinese Foreign Ministry spokesperson Hua Chunying said the US should not implement it.

“We urge the US side to correct its mistake, not to implement the so-called ‘Hong Kong Autonomy Act’ and immediately stop meddling in Hong Kong affairs and China’s internal affairs in any way,” she told a media briefing here.

This act smears our law on safeguarding national security in Hong Kong Special Administrative Region (HKSAR). If the US insists on going on the wrong path, China will definitely hit back, she said.

The US attempt to obstruct China’s national security legislation for the HKSAR will be to no avail and China will make necessary responses to protect its legitimate interests and impose sanctions on relevant US personnel and entities, she said.

“This US move has grossly interfered in China’s internal affairs and seriously violated international law, as well as the basic norms governing international relations,” she said.

After passing the national security law which drew global condemnation and criticism, China on July 8 opened its first security office at the leading global hub for international business.

The office facilitated for the first time the presence of China’s security establishment in the global business hub after it came under the control of Beijing in 1997. Till now, the security was maintained by Hong Kong police.

The new national security office places mainland Chinese agents in the heart of the territory for the first time.

Earlier, Trump in Washington said he has signed legislation to sanction Chinese officials responsible for cracking down on political dissent in Hong Kong.

“Today, I signed legislation and an executive order to hold China accountable for its oppressive actions against the people of Hong Kong,” Trump said at a White House press conference on Tuesday.

The president also said he signed an executive order ending US preferential treatment for Hong Kong, a former British territory handed over to China in 1997.

“Hong Kong will now be treated the same as mainland China. No special privileges, no special economic treatment and no export of sensitive technologies. In addition to that, as you know, we are placing massive tariffs and have placed very large tariffs on China.

“The Hong Kong Autonomy Act was passed unanimously by the Congress,” he said, adding that the law gives his administration powerful new tools to hold responsible the individuals in the entities involved in extinguishing Hong Kong’s freedom.