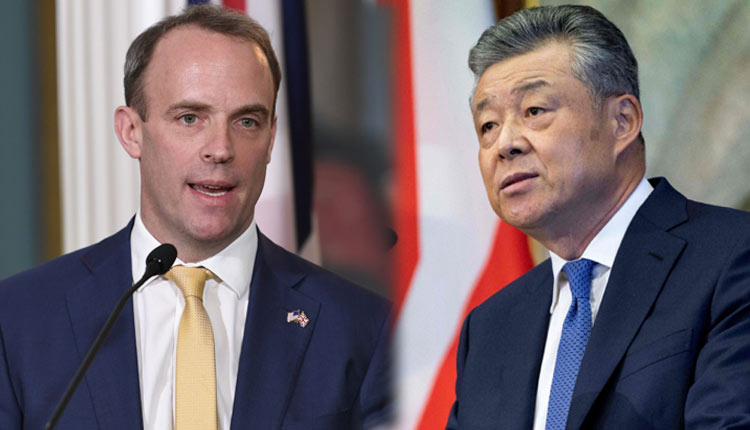 London: China has hit back with a warning that Britain must bear the consequences if it continues what it believes is interference in its internal affairs after the UK suspended its extradition treaty with Hong Kong.

The United Kingdom is watching. And the whole world is watching, Raab said, in a warning to China.

Soon after, the Chinese Embassy in London and the Chinese ambassador to the UK issued strong statements condemning the UK’s move as a disregard for its representations and blatant interference in its internal affairs.

China has never interfered in UK’s internal affairs. The UK should do the same to China. Otherwise it must bear the consequences, he said.

The Chinese Government remains unwavering in its resolve to implement the National Security Law for Hong Kong SAR, to safeguard national sovereignty, security and development interest, and to oppose external interference. China will firmly fight back at any move that interferes in its internal affairs, the statement noted.

China urges the UK side to immediately stop interfering in Hong Kong affairs, which are China’s internal affairs, in any form. The UK will bear the consequences if it insists on going down the wrong road, it added.

The Chinese authorities insist that the controversial new National Security Law for Hong Kong is an anchor for the steady and sustained implementation of One Country, Two Systems and for the long-term security, prosperity and stability in Hong Kong.

This Law will make Hong Kong a safer, better and more prosperous place. We are full of confidence in the bright future of Hong Kong SAR, the Chinese Embassy claimed.

However, there are widespread global concerns over the law being used to breach the human rights of Hong Kongers.

In reference to the extradition arrangements, Raab told the UK Parliament that Britain was particularly concerned about Articles 55 to 59 of the new National Security Law, which gives mainland Chinese authorities the ability to assume jurisdiction over certain cases and try those cases in mainland Chinese courts.

Highlighting considerable uncertainty about the way in which the new National Security Law will be enforced, the minister said the UK will hold China to its international obligations .

The tensions between the UK and China have been ramping up across a range of issues, with Britain already offering around 3 million Hong Kongers citizenship rights in response to the controversial National Security Law.

The UK handed Hong Kong back to China in 1997 but, as part of an agreement signed at the time, it enjoys some freedoms not seen in the mainland.

Over the weekend, Raab also accused China of egregious human rights abuses against a minority group known as the Uighurs, mostly Muslims and see themselves as culturally and ethnically close to Central Asian nations.

The majority live in Xinjiang, western China, where they number about 11 million people. It is alleged that the Chinese government has detained up to a million Uighurs over the past few years in what the state defines as “re-education camps”.

UK Prime Minister Boris Johnson has tried to steer away from what he fears could become an anti-China rhetoric but stressed that Britain is committed to a “calibrated approach”.