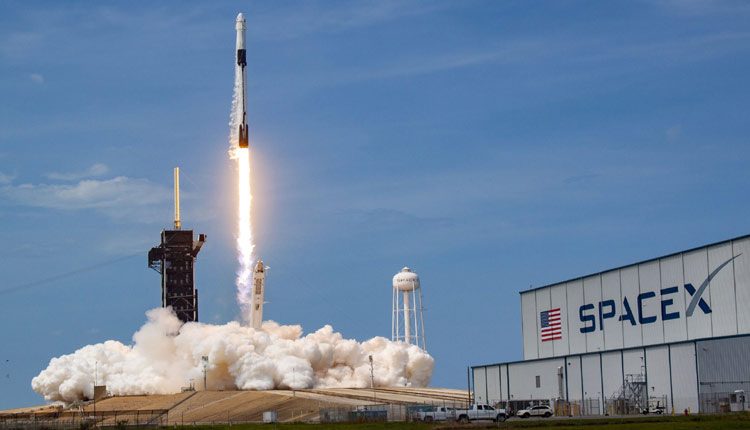 Washington: A rocket ship built by Elon Musk’s SpaceX company on Saturday successfully blasted off with two NASA astronauts into orbit from the US state of Florida on their way to the International Space Station, marking the dawn of a new age in commercial space travel.

The blastoff from Kennedy Space Center in Florida also assumes significance as it marks the launch of humans into orbit from US soil for the first time in nearly a decade.

Falcon 9 lifts off from historic Launch Complex 39A and sends Crew Dragon to orbit on its first flight with @NASA astronauts to the @space_station pic.twitter.com/UOoaKiQaFk

With the liftoff, SpaceX became the first private company to launch people into orbit, a feat achieved previously by only three governments: the US, Russia, and China.

The reusable, gumdrop-shaped capsule called Crew Dragon, would now take the two American astronauts to a 19-hour journey to the International Space Station (ISS). The spacecraft is scheduled to dock with the ISS at 10:29 am EDT on Sunday.

The successful launch, which was postponed early this week due to inclement weather, gave Americans something to cheer about as in the last three months they have lost over 100,000 of their countrymen due to the coronavirus that has brought the country’s economy to its knee. More than 40 million people have lost their job and the pandemic has pushed the economy into a recession.

Top US leadership including President Donald Trump, First Lady Melania Trump, and thousands of curious Americans had gathered to watch the launch live on a bright Sunday afternoon.

Congratulating Musk, NASA and the astronauts, Trump described the launch day as a great day for the country.

Falcon 9 launches Crew Dragon on its first flight with @NASA astronauts on board! pic.twitter.com/FUd0SSRKud

“I’m so proud of the people, of NASA, public and private. When you see a sight like that, it’s incredible. When you hear that sound the roar you can imagine how dangerous it is,” he told reporters soon thereafter.

“I think this is such a great inspiration for our country. Our country is doing well… We suffered something that was terrible. It should have never happened it should have never come out of China… That’s one of the reasons why I wanted to be here today and I think anyone of you would say that was an inspiration to see what we just saw,” Trump said.

The President said he spoke with Musk, whom he called one of the “great brains.” He also spoke with the two NASA astronauts prior to takeoff.

“What a historic opportunity to watch the first launch of astronauts from American soil to the Space Station since 2011,” Secretary of State Mike Pompeo said. “Launch America is the first big step on our roadmap to the Moon for Artemis,” he said. NASA’s Artemis programme, the US initiative to explore more of the lunar surface, aims to land the first woman and next man on the Moon by 2024.

“This is a dream come true for me and everyone at SpaceX, said Musk, who is also the CEO of Tesla.

“It is the culmination of an incredible amount of work by the SpaceX team, by NASA and by a number of other partners in the process of making this happen,” he said.

“Today a new era in human spaceflight begins as we once again launched American astronauts on American rockets from American soil on their way to the ISS, our national lab orbiting Earth,” said NASA Administrator Jim Bridenstine.

“The launch of this commercial space system designed for humans is a phenomenal demonstration of American excellence and is an important step on our path to expand human exploration to the Moon and Mars,” he said.

“Today, in lifting our ambitions and our imaginations to the heavens, the United States has once more reshaped the future of space travel,” said Joe Biden, former US Vice President and Democratic Party’s presumptive presidential nominee.

“When Robert Behnken and Douglas Hurley blasted off from Cape Canaveral, Florida, on a mission to the ISS, they added their names to the long list of heroes who have changed the way we think about our universe and our place in it, he said.

“Their voyage not only marks the return of American astronauts travelling to space from US soil, but a pioneering new phase of public-private cooperation for the peaceful exploration of space,” Biden said as he asserted that the seed of today’s launch was planted by the Obama-Biden administration.

“We planted the seeds of today’s success during the 2009 Recovery Act, which according to NASA, has saved taxpayers up to USD 30 billion and invigorated an aerospace industry in Florida that accounts for more than 130,000 jobs in the state,” he said.

“It’s been nearly 10 years for we last launched American astronauts from American soil on an American rocket. The successful launch today is the culmination of years of hard work and commitment through NASA’s Commercial Crew Program,” he said.

Congressman Kevin McCarthy said the launch of the spacecraft is a “testament to American ingenuity and our country’s profound ability to overcome challenges as they arise, particularly in the age of COVID-19“.

Congresswoman Kendra Horn, chair of the Space Subcommittee of the House Science, Space, and Technology Committee, congratulated NASA and SpaceX on successful demonstration launch of astronauts Hurley and Behnken to the ISS.

Known as NASA’s SpaceX Demo-2, the mission is an end-to-end test flight to validate the SpaceX crew transportation system, including launch, in-orbit, docking and landing operations. This is SpaceX’s second spaceflight test of its Crew Dragon and its first test with astronauts aboard, which will pave the way for its certification for regular crew flights to the station as part of NASA’s Commercial Crew Programme.

After successfully docking, the crew will be welcomed aboard the International Space Station, where they will become members of the Expedition 63 crew, which currently includes NASA astronaut Chris Cassidy.