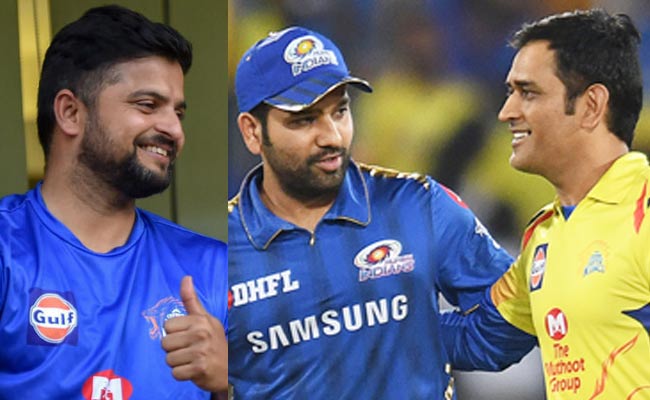 New Delhi: India’s limited-overs deputy Rohit Sharma’s style of leadership has often been seen as completely different from skipper Virat Kohli’s style and has often been compared to that of former India skipper Mahendra Singh Dhoni. And Suresh Raina believes that Rohit’s calmness and ability to motivate players makes him very similar to Dhoni.

“Rohit’s captaincy is very similar to MSD. The way he does things calmly, the way he motivates people. He is bindaas, he knows that whenever he goes to bat he’ll make runs. So this sort of confidence is there in a player, then the rest of the players also pick that up from him… this is what I like about Rohit.

“I recently saw in that final against Pune, Rohit made some 2-3 great moves as captain of Mumbai.. in crunch situation the way he made changes between overs on a dry wicket, the way he released pressure then created pressure. Watching that you know that he is taking all these decisions himself. Yes, there must be some advice coming from outside but in his mind, he knows what to do when. No wonder he has won so many trophies as captain,” Raina said on Sportscreen’s YouTube page.

Middle-order batsmen often talk about getting comfortable at a position, but Raina said that he never questioned his batting position or why he was shuffled in the order with Dhoni.

“No, I never questioned him about it. I remember during the 2015 World Cup he sent me higher up the order to bat and I got 70-80 odd in that game. Later that evening I asked him, how and why did you think of sending me that high up and he said because they had two leg-spinners bowling and he knew that I would play them better. Even now I think about those occasions.

“But I know that he (Dhoni) was always thinking one step ahead from us because they guy is standing behind the stumps, watching the entire proceedings, the cameras, the crowds, that man can’t be wrong. He knows how much it is swinging, how much the pitch is turning. God has certainly gifted him with some special ability and that’s why he’s been such a successful leader,” he said.

Asked about BCCI CEO Rahul Johri’s comments on the IPL, Raina said: “I don’t think without foreigners IPL will ever be that interesting. Foreign players have to be there. They bring in experience and challenge of a different kind. Anyway there is the four foreign players in every team rule that exists and with foreign players around one enjoys more and one gets to learn a lot also, as has been the case since the beginning of IPL where top international batsmen and bowlers have been a part of it.”

Rohit Sharma Can Break Lara’s Record Of 400 Not Out: David Warner