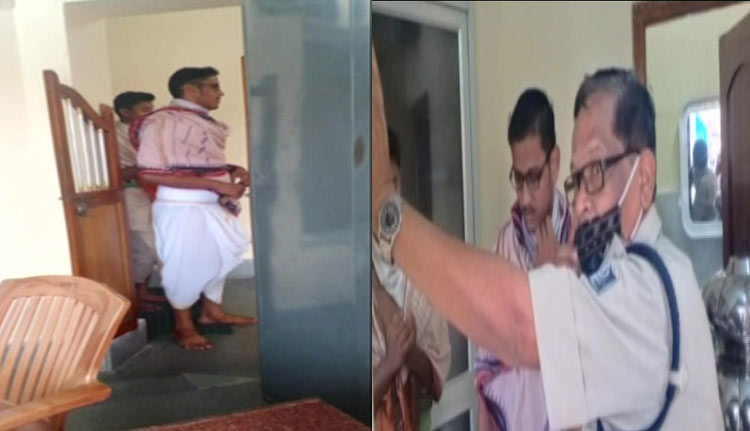 Puri: As many as three persons were caught while illegally entering the Puri Gundicha temple without any permission today.

Two local residents identified as Abhijit Mohanty of Kumbharpada area and Smruti Ranjan Mohanty of Markandeswar Sahi in the pilgrim town were detained while entering the shrine dressed as servitors.

The duo, dressed in patta like the Srimandir servitors entered the Gundicha Temple through its Singhadwar while the Mangala Alati of the Lord Jagannath and his divine siblings was underway in the morning.

However, some servitors grew suspicious and questioned them about their identity. When they could not give satisfactory answers, the two were handed over to the Jagganath Temple Police personnel.

Later, Kumbharpada police took both of them into custody for further interrogation.

A few hours after the incident, another person was also caught red-handed while trying to make into the shrine by producing a fake ID card as an assistant of a servitor in charge of Rath Yatra duty in the temple.

It may be noted that Police DG and Shree Jagannath Temple Administration has made it clear that anyone other than those on Covid duty be it any servitor or poilice or even common man will not be allowed entry into Gundicha Temple or Srimandir due to strict instructions from the Supreme Court in the wake of Covid pandemic.

Reports of two back-to-back incidents of unauthorised entry to the temple have raised concerns on the security arrangements.

In fact, the annual Rath Yatra on June 23 was also conducted without the participation of devotees and the chariots were only pulled by the temple servitors.