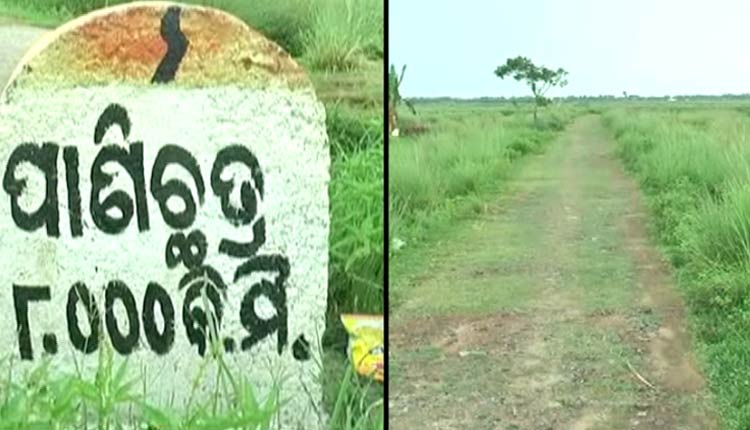 Konark: Residents of Sorova Panchayat under Gop block in Puri district have alleged large-scale corruption in the construction work of a road in their locality.

As per sources, over Rs 10 lakh has been sanctioned in various phases for the road construction of the 8-km road connecting Sorova High School and Maheswar ME School to Konark Panichatra RD road between 2010 and 2020 under MGNREGA and 14th Finance Commission.

Again, an estimate of Rs 5.5 lakh was made in FY 2018-19 and a bill of Rs 3, 99,702 was approved.
However, the reality is that despite sanction of funds on multiple occasions in the last 10 years, the construction of the road hasn’t even started till date. Sadly, the condition of the kaccha road worsens with every passing day.

What is more shocking that despite big talks of transparency and accountability in the government, another bill of Rs 2, 35,479 was reportedly paid to Gram Rojgar Sevak, Krushna Chandra Swain for the “repair” of this road in 2019-20 but the road construction is yet to see the light of the day.

Smelling corruption, local residents have demanded a high-level investigation and also submitted a written complaint to the Chief Minister and concerned authorities.

Speaking to OTV, local resident Narayan Nayak said, “Hundreds of people commute over this road on a daily basis. There are also few households who are completely dependent on this road for their everyday travel. We have been demanding for the construction of this road for the last 15-years to our Sarpanch but they end up giving us false assurances all the time. Now multiple bills issued in the name of construction of this road has left us in shock.”

Another resident Mangraj Sen said, “Forget about vehicles, it is even difficult to walk on this road especially post-rain when the entire road turns a pool of mud. We have complained apprised the concerned officials many times but there has never been any response from them. We have written to the CM and other officials about it and are waiting for their justification.”

However, Block Development Officer of Gop, Deepti Rani Das said, “I haven’t received a written complaint as of now. After receiving the grievance, Asst Engineer and concerned JEE will definitely do an enquiry about it. I will also personally visit the site and see if there is any corruption activity. In that case, strict legal action will be taken against the concerned officials.”