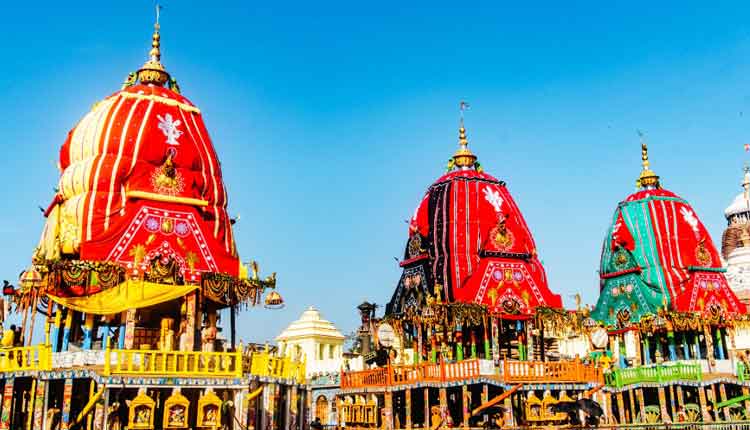 Puri: A day after witnessing the spectacular golden makeover (Suna Besha) of Bada Thakura Balabhadra, Mahaprabhu Jagannath, and Devi Subhadra, devotees will get a chance to see once-a-year spectacle of Adhara Pana offering to the Lords. Due to Covid pandemic restrictions, people will have to watch the event from home through live telecast.

Adhara Pana is a ritual of offering ‘pana’, a special drink prepared with milk, banana, cheese, aromatic spices and water. As per the practice, it is held atop three chariots of the deities-Nandighosha, Taladhwaja and  Devadalana- where they are seated after returning from Gundicha temple.

Odia Mutt, Raghab Das Mutt and Srimandir administration make arrangements for all the ingredients needed for preparation of the special drink.

The water used to prepare the drink is collected by Pania Apat servitors from a well on the premises of Chhauni mutt near the Singhadwara. It is then offered to the deities in their respective chariots in nine large cylindrical-shaped pitchers, three for each deity.

The one meter tall pitchers are placed in a manner that they touch the lips of the three siblings.

After the drink is offered to the deities, servitors break the earthen pitchers in order to spill the drink over the chariots.

It is believed that subsidiary deities (parswa deva devi) fitted in the outer parts of the chariots and evil spirits consume the holy drink to attain salvation.

After the Adhara Pana rituals, Niladri Bije, the return of the deities to Srimandir’s Ratna Singhasana, will be held tomorrow to mark the conclusion of the nearly two-week long festival.

“I am hopeful that the residents of Puri will continue same cooperation which they extended during Bahuda and Gundicha Yatra so that Adhara Pana and Niladri Bije rituals can be conducted smoothly,” said SJTA chief administrator Krishan Kumar.