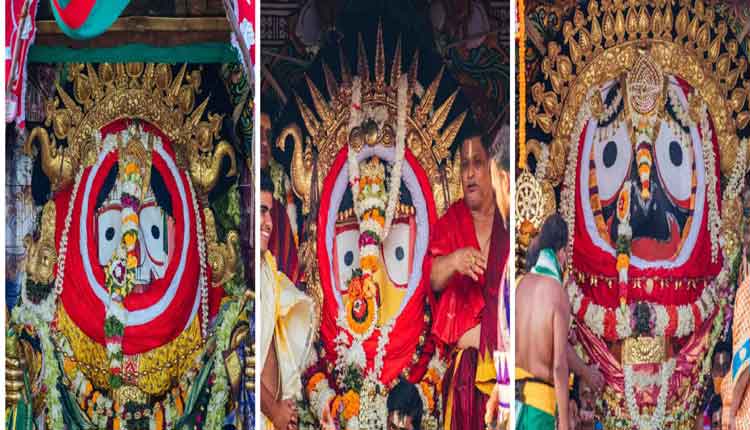 Puri: Suna Besha is considered as one of the most spectacular rituals of Rath Yatra as on this auspicious day the Holy Trinity- Lord Balabhadra, Devi Subhadra and Lord Jagannath-gives darshan to millions of devotees embellished with gold. The Suna Besha is also called the Rajadhiraja Besha.

Though no devotees were allowed for this year’s Rath Yatra in view of the COVID-19 pandemic, the devotees were glued to their television sets and watched the entire proceedings right from the start of several rituals atop the three gigantic chariots on Thursday. Suna Besha ritual though is held several times inside Puri temple, it is on the day after Bahuda Yatra today that the deities adorn the golden attire atop their respective chariots outside the temple.

The preparations for Suna Besha started around 4:50 pm on Thursday afternoon and the deities adorned nearly 138 kinds of gold ornaments including kiriti, sribhuja, sripahara, kundala, baghadamali, ghagera, kadambamali among others.

A thick blanket of security was in place in Puri for the Suna Besha ritual of the presiding deities of Srimandir- Lord Balabhadra, Devi Subhadra and Lord Jagannath. Nearly, 60 platoons of police force were deployed for the smooth conduct of the festival. Additional one platoon was engaged for escorting and guarding the ornaments of the deities, informed Puri SP, Uma Shankar Dash.

The administration has relaxed the curfew from 5 AM to 3 PM today but the restrictions were re-imposed from 3 PM to 10 PM for the Suna Besha. However, day-long restrictions on public movement were clamped from the stretch between Market Chhak to Singhdwara by the Puri district administration.