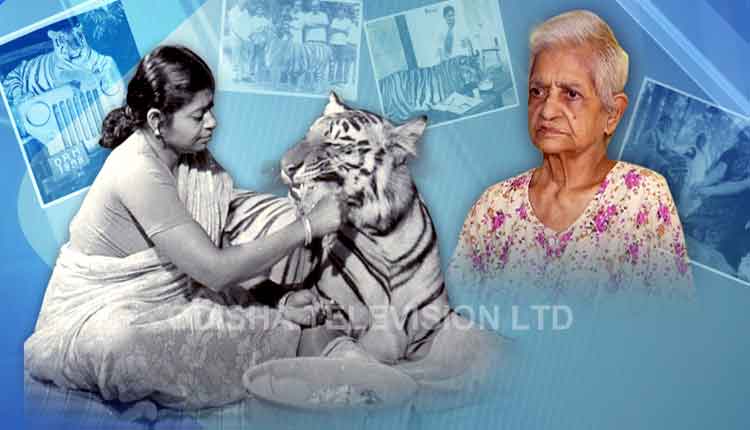 Bhubaneswar: It is often said that love has the power to transcend unconceivable barriers & connect. The words ring true in the case of Khairi, a tigress who used to rush to the call of her foster mother Nihar Nalini Swain.

It’s now over four decades that Khairi breathed her last in 1982, however, 90-year-old Nihar Nalini Swain still remembers the fond memories of how she along with her husband Saroj Ray Choudhary raised Khairi who was rescued as a cub.

The story of this unique bond between human and animal is certainly inspiring at a time when there has been a rise in human-animal conflict in different parts of the country.

Nihar Nalini Swain, who is spending her life at an old-age ashram, has not forgotten Khairi, who had become an inseparable part of her family. From feeding to playing with her, Nalini remembers every moment spent with Khairi.

“Every day, one goat would be fed to Khairi when we had found her alongside a river in 1972. We then brought it to Jashipur. She used to sleep beside me,” said Nalini adding that she has been lonely after Khairi’s death.

Nalini’s brother Sashi Bhusan Swain said, “They found the cub near the river and named her Khairi.”

Ajit Kumar Patra, Administrator of old age home in Cuttack, where Nalini lives, said, “As far as I know, both Nalini and her husband had devoted their entire life to Khairi. Nalini is now missing her the most.”