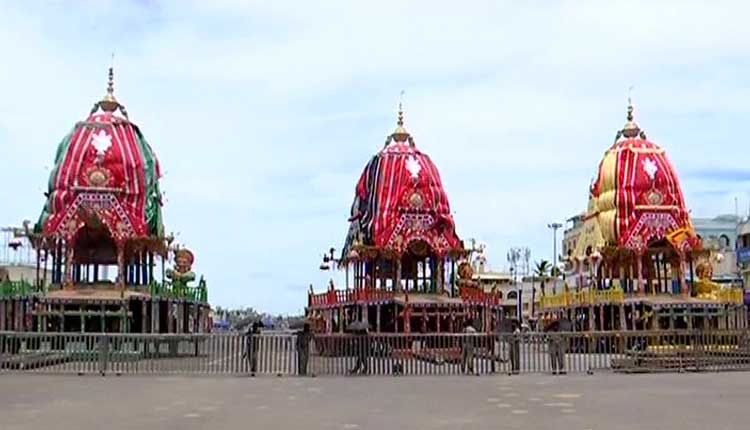 Puri: The stage is all set for the Hera Panchami ritual, which will be conducted in Puri today. The ritual is celebrated on the fifth day of Rath Yatra.

Hera Panchmi is a centuries old tradition and one among the many sacred rituals of the Rath Yatra festival.

Although, the Rath Yatra is all about Lord Jagannath, the celebrations is inconceivable without the presence of Goddess Lakshmi.

“Goddess Laxmi will be taken to Lord Jagannath through the ‘Jaya Bijaya Dwara’ where she will receive an ‘agyan mala’ (a garland of consent) from Pati Mohapatra servitors on behalf of the Lord,” said Nabakishore Mohapatra, Pati Mohapatra Servitor.

Meanwhile, the preparations for the Bahuda Yatra or the return journey of the Holy Trinity will also begin today.

Chief Minister Naveen Patnaik urged officials to strictly adhere to the Supreme Court’s order and COVID-19 guidelines to make the return journey of Lord Jagannath successful as the whole world is watching the historic event amid the pandemic.

The world is watching #Puri!

Patnaik, who on Friday reviewed the preparations for the Bahuda Yatra (return car festival) of the divine siblings scheduled to be held on July 1, congratulated the servitors of the 12th century shrine, Shree Jagannath Temple Administration, Health department, police and Puri district administration for ensuring a hassle-free Rath Yatra amid COVID-19 curbs on June 23.

Patnaik also urged the servitors to complete all the rituals on time and directed the temple and the district administration to strictly ensure that only those who have tested negative for COVID-19 are allowed to participate in the rituals and chariot pulling on Bahuda Yatra.

Emphasising on the need for proactive steps to implement curfew and lockdown, the chief minister also called upon the police to do their job with a human face.

Aggressive surveillance should be undertaken for COVID-19 symptoms and Coronavirus testing must be enhanced, the chief minister said, adding that volunteers can be engaged for community mobilisation in creating awareness among people.

Patnaik said the State Information and Public Relations department should ensure live telecast of Bahuda Yatra and other rituals like Suna Besha, Adhara Pana and Niladri Bije so that people can watch the proceedings at home.

The Supreme Court had on June 22 granted permission for holding the Rath Yatra by having a limited number of servitors amid several restrictions without public attendance in view of the COVID-19 pandemic.