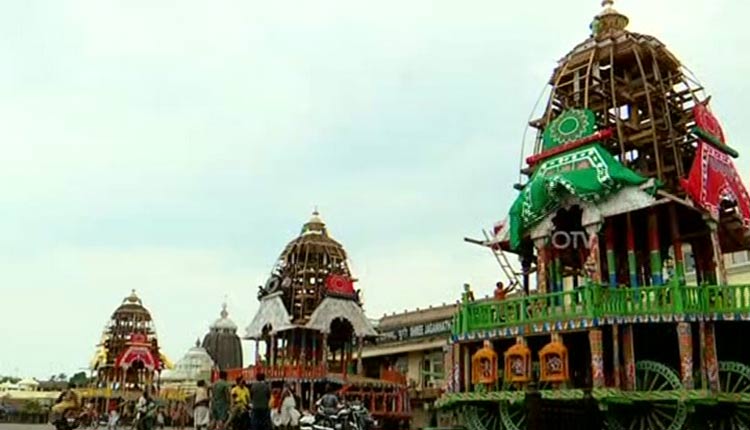 Puri: As millions of Jagannath devotees anxiously await the Supreme Court’s hearing on the petitions seeking modification of its stay order on Rath Yatra, members of the Puri Jagannath Temple Managing Committee today clarified that the rituals in the 12th-century shrine may get disrupted if the chariots of the Holy Trinity are not pulled after the customary ‘Agyan Mala’ niti.

Member of the committee, Rama Chandra Das Mohapatra informed that as per the practice, the ‘Agyan Mala’ (garland of the consent) will be brought to the chariots on the Ratha Khala for their initiation by three Pujapandas a day before the Rath Yatra.

With just a day remaining for the Rath Yatra, Mohapatra said the chariots will have to be pulled to Singhadwara of the temple so that they can be readied for the commencement of the festival, but if the government does not give its consent for the pulling of chariots, further rituals of the Lords may not proceed as usual.

The managing committee members have once again pleaded the government to approach the top court and ensure the conduct of the Car Festival without devotees and under the strict compliance of Covid-19 guidelines.

Either the government should seek the apex court’s order or pass an ordinance to conduct the festival, he said.

It may be noted that Puri Gajapati had also on Saturday said that the conduct of annual Rath Yatra on the prescribed day (Ashadha Sukla-paksha Dwitiya) is statutorily mandated by the Record of Rights and the Managing Committee of the shrine is bound to ensure the conduct of Rath Yatra.

Soon after the presser by members of Jagannath Temple Managing Committee, Odisha Law department informed that it will take favourable action as legally permissible on the request of Puri Gajapati when the writ petition W.P. (C) No. 571 of 2020 is taken up for hearing before the Supreme Court on Monday.

#RathYatraCancellation: #Odisha govt to take favourable action as legally permissible on the request of Puri Gajapati when the writ petition W.P.(C) No. 571 of 2020 is taken up for hearing before the Supreme Court, informs State Law Dept#SCStaysRathYatra #RathYatra2020 pic.twitter.com/CZ4A8cEskj

The State government has further clarified that its stand during the hearing in the top court on June 18 ‘was primarily related to thousands of Ratha Yatras taking place all over the State’ and not only in Puri. ‘These involve lakhs of people, and happen almost in every Gram Panchayat of the state.’

In a letter, the Law Department explained that more than five lakh people of Odisha have returned back to the state since May with most of them likely to complete their quarantine period by the end of June. The Covid pandemic is likely to peak in the State in June & July and any congregation during the probable peaking period would lead to loss of lives and serious public health hazard.

Senior Supreme Court lawyer Sarthank Nayak questioned why Odisha government did not respond to Puri Gajapati’s letter on June 5 when an alternative roadmap for conducting Rath Yatra in view of Covid pandemic was proposed to it by the Temple Managing Committee and why it was also not presented before the Supreme Court.

Calling the latest development as a step by the Odisha government to control the damage which has already been done, Nayak criticised that the government did not show real intention to conduct the festival which is clear from its stand it presented in the apex court during the June 18 hearing.

“Instead of saying about how Covid situation might become out of control in case Rath Yatra is held in Odisha, if the government had clearly mentioned about its preparations for the festival specifically in Puri, the court could have pronounced a different judgement, so, in order to hide its failings, the government is now making irrational statements,” said Nayak.