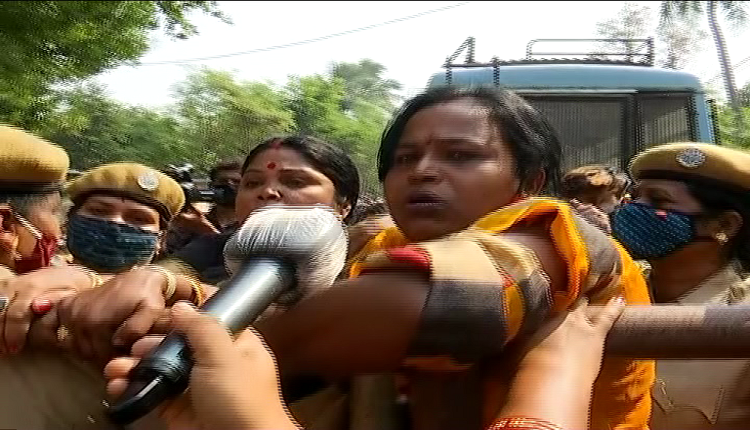 Bhubaneswar: High tension prevailed in front of the official residence of Odisha Agriculture Minister Arun Sahoo when a scuffle broke out between the activists of Odisha BJP Mahila Morcha and the police when the activists attempted to barge into the Minister’s residence, demanding his resignation for his alleged involvement in the abduction and murder of the five-year-old Nayagarh girl, ‘Pari’.

The women wing of the saffron party in the State, which has been mounting its attack on the minister for the last few days, also demanded a fair inquiry by a central agency like CBI into the heinous crime that has sent shock waves across the state.

“We demand immediate ouster of Arun Sahoo from the State Cabinet and a CBI investigation into the entire episode. Those who are behind the organ trade racket should be put behind bar,” said party general secretary Lekhasri Samantsinghar who led the protest.

She questioned “Why Chief Minister Naveen Patnaik is afraid of Arun Sahoo? What are the reasons for keeping quite on a minister who has already been exposed in the ghastly murder of a little girl?”

Over hundred agitators of BJP’s women wing marched towards the residence of Sahoo, raising slogans for his ouster from the State Cabinet. Policemen deployed on the road between Kasturba Nari Mahal and the Minister’s quarters had a tough time to control the protestors. The women protesters clashed with the police when the latter tried to prevent them from entering the Minister’s residence.

BJP has been accusing Sahoo of shielding the prime accused Babuli Nayak in the heinous crime. BJP State president Sameer Mohanty who earlier alleged the involvement of a well organised organ trade racket in the kidnapping and murder of Pari, today said that his party will spearhead a mass movement across the State for justice to the minor girl. He said that the prime accused-Babuli Nayak, who is a close confidante of Minister Arun Sahoo, runs the racket at the behest of the former. While reiterating his demand for a CBI inquiry, Mohanty feared that the SIT probe would fail to unravel the truth since the accused has been protected by a minister.

It is worth mentioning that ‘Pari’ was allegedly abducted before her skeletal remains were found in the backyard of her house in July this year. Her parents, who ran from pillar to post for justice for their daughter, attempted to immolate themselves in front of the Assembly building last week in a desperate bid to draw the government’s attention to their plight.

COVID-19 Vaccination Drive Will Begin As Soon As Scientists Give Nod: PM Modi At All-Party Meet