Assembly Speaker directs MoS Home to put forth his statement on the issues raked up by the Opposition pertaining to the death case of 5-year-old Pari of Nayagarh. 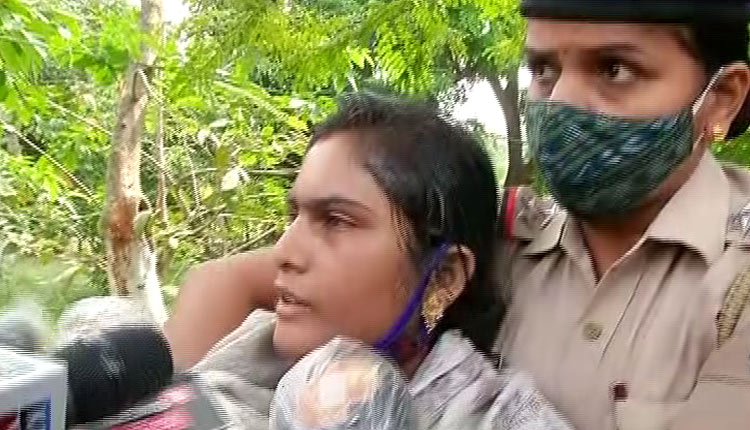 Bhubaneswar: High drama unfolded outside the Odisha Assembly here today after a couple attempted self-immolation in a desperate bid to seek justice for their 5-year-old daughter ‘Pari’ who was allegedly kidnapped and murdered months ago in Nayagarh. Moments after being overpowered by police personnel deployed on security duty, the hapless couple alleged that minister Arun Sahoo is shielding the accused who perpetrated the gruesome murder of their daughter.

The couple – Ashok Sahoo and Saudamini – of Jadupur village in Nayagarh district attempted to set themselves on fire by pouring kerosene, but fortunately, police and security personnel deployed at the Assembly premises rushed to them and foiled the immolation bid.

“Our daughter was brutally murdered. Babuli Nayak along with his accomplices killed her. Even as months have passed, the accused are moving scot-free. Minister Arun Sahoo is a crook, he is sheltering the criminals,” said the mother in despair, alleging police inaction.

On July 14, Pari was reportedly abducted when she was playing outside her residence in the village. The couple ran from pillar to post seeking help to trace her, but their desperate pleas were neither heard by police nor any other administration officials. Exactly ten days later, the minor girl’s bones and body chopped in parts, stashed in a sack, were found dumped in the backyard of their house, the couple said.

Though police subsequently registered a murder case and interrogated a number of persons, it hasn’t succeeded in arresting the miscreant(s) involved in the gruesome murder, they alleged.

The one name that recurred in their allegations was Babuli Nayak from their village, who reportedly happens to be a BJD leader and is their prime suspect.

“Our daughter was killed by people close to Minister Arun Sahoo. We were driven out of the village when we demanded action against the culprits. The killers had gauged out my daughter’s eyes and kidneys. Why is Babuli Nayak not being arrested? He is absconding since last month,” rued Pari’s father.

It is further alleged that the perpetrators tried to kill them when they were in a hospital on October 26. Based on a complaint lodged in this regard, police arrested ten persons. Again after a few days, both of them were allegedly picked by police in the middle of the night for some investigation.

Bhubaneswar DCP Umashankar Dash informed, “This morning, Soudamini and her husband arrived in an auto-rickshaw from AG square towards the Sachivalaya. When they got down from the vehicle, police personnel deployed nearby reached out to them to find if there was something wrong. Seeing kerosene bottle in their hands, police overpowered them and foiled the suicide bid. The couple was then taken to Capital Hospital for a preliminary check-up. Upon interrogation, we learnt that a case has been registered with Nayagarh Sadar Police in connection with their daughter’s death. Nayagarh SP spoke to them over phone and has assured action. The couple will be sent back to their home.”

Minister Arun Sahoo, who has been accused of having direct links with Babuli, is yet to respond to the allegations levelled by the couple.

Meanwhile, the House witnessed a noisy session today after both the BJP and the Congress targeted the State government over deteriorating law and order situation. Congress legislature party leader Narasingha Mishra has raised questions over the role of Intelligence and Police in this case.

“A couple tried to kill themselves at the Odisha Assembly today, insisting that a very prominent BJD leader is sheltering the rapist & murderer of their 5-year-old daughter. Wonder if liberals & national media will descend on Bhubaneswar with the same outrage as with some states,” tweeted BJP National Vice-President Jay Panda.

Assembly Speaker SN Patro later directed Minister of State (MoS), Home, Dibyashankar Mishra to put forth his statement on the issues raked up by the Opposition pertaining to the death case of the five-year-old girl from Nayagarh.

Odisha: ‘Complaint Officers’ To Look Into Grievances Of Transgenders