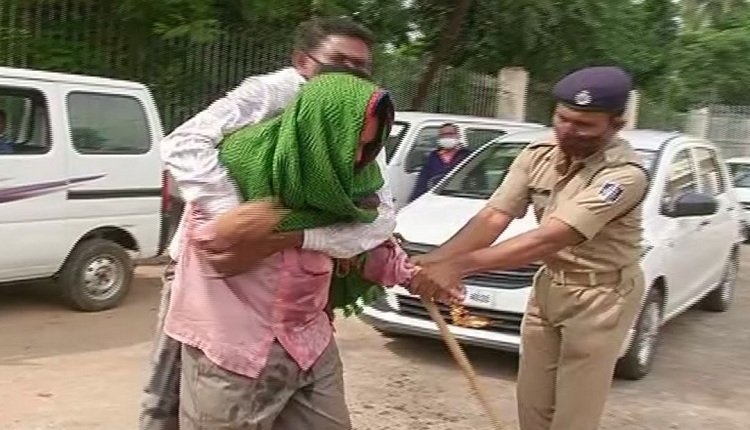 Bhubaneswar: Security outside Odisha Assembly went into a tizzy after a couple from Nayagarh district allegedly attempted to commit suicide outside the high-security zone on Tuesday.

As per reports, the couple allegedly made an attempt to immolate themselves by pouring diesel on their bodies.

However, both were prevented  from the act by the timely intervention of the police and security personnel who overpowered them before they could set themselves on fire.

According to reports, the couple, identified as Ashok Sahu and Saudamini of Jadupur village in Nayagarh district, has been running from pillar to post to seek justice for their 5-year-old daughter who was allegedly  murdered by some people in their village sometime  back.

The couple alleged that their daughter had been kidnapped two months ago. Though they ran from pillar to post to seek help in tracing their daughter, neither police nor did other administrative officials take any initiative for that.

After a few days, the body of their daughter was found few meters away from their house, the couple said. It is suspected that the killers had dumped the body in the backyard of the couple’s house.

Though police had subsequently registered a murder case, no effort was made to nab the miscreants involved in the gruesome murder, they alleged.

In their complaint before the police, the couple had identified one Babuli Nayak from their village as the potential killer.

The couple alleged that they were repeatedly harassed by police officials who did not initiate any action against the suspect as he happens to be a BJD worker. “Our daughter was killed by people close to Minister Arun Sahu. That’s why we were driven out of the village when we demanded action against the culprits,” they alleged, adding, “ the killers had gauged out their daughter’s eyes and kidneys.

“We seek justice for our daughter,” they said.