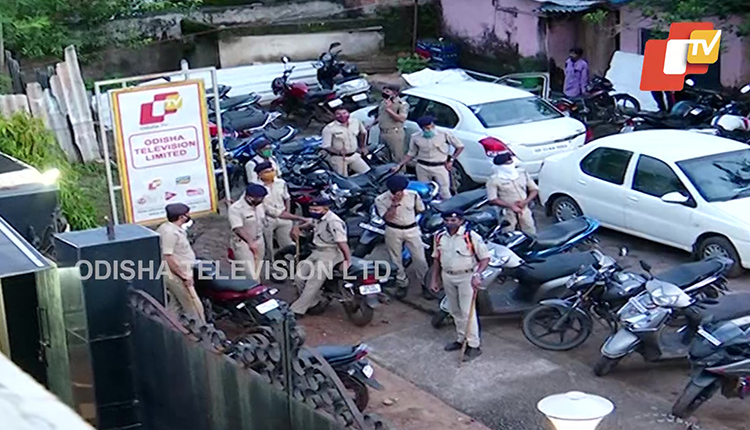 Bhubaneswar: Odisha Television Network Limited (OTV) continues to get targeted, in what could arguably be called a malicious attempt to weaken & muzzle the voice of the State’s largest media house. The latest in the string of such deliberate attacks has raised serious concerns as the Keonjhar Police yesterday picked up a senior journalist of OTV, Ramesh Rath, right in the middle of a road, in connection with an old case and also went on to conduct a search inside the premises of the media house, that too without being able to produce any written notice or warrant. What is even more disconcerting is the fact that police officials remained deployed at the OTV office premises for over 24 hours.

Such targeted harassment leads one to question – was it because of the report that was telecast by the media house regarding the aerial survey of the flood-hit areas by Odisha CM Naveen Patnaik? OTV journalist Rath was suddenly picked up by police yesterday in connection with a 2019 case and he was not only forcibly put into a police vehicle, but he was taken from one police station to another without any plausible reason. Moreover, police did not even inform his family members, all of which can be argued as deliberate harassment. Rath and OTV authorities maintained that they cooperated with the police in their investigation and despite that the journalist was released at 10:30 PM after being served a notice to appear before the Keonjhar Sadar Police Station on October 21.

“Without any intimation, police picked me up today in connection with an old case and seized my mobile phones. I was taken to Chandrashekharpur Police Station and issued a notice to appear before the Keonjhar Police. While the case has been closed and the charge-sheet already filed, police have once again initiated the probe for vested interests,” said Rath.

“OTV is being harassed for the last 3 months ever since we broke the story of the alleged corruption by the Odisha government in COVID19 funds. They have been filing FIRs left, right and centre against us. They have been making allegations against us, for no reason whatsoever. They picked up our journalist from the road without any notice. We have been cooperating with the agencies, police, and the crime branch; and also in every interrogation and investigation,” said Litisha Mangat, the operating officer of OTV Network.

Though the Keonjhar Police left OTV premises, personnel from the Commissionerate Police remained deployed outside the premises for over 24 hours severely curtailing the movement of journalists, company officials and citizens with grievances.  Though the police officials were repeatedly asked about why they have been deployed and what they were guarding, no satisfactory response could be obtained from them.

“We are here on law & order duty. I cannot say who has ordered us to do so,” said one of the police officials who was deployed in the media house premises.

“We have been asked to just stay here and nothing else. We are carrying out orders of our authorities,” said another police official.

Later during the day, after a report on the same was telecast on OTV, the police left the premises at around 4:30 PM.