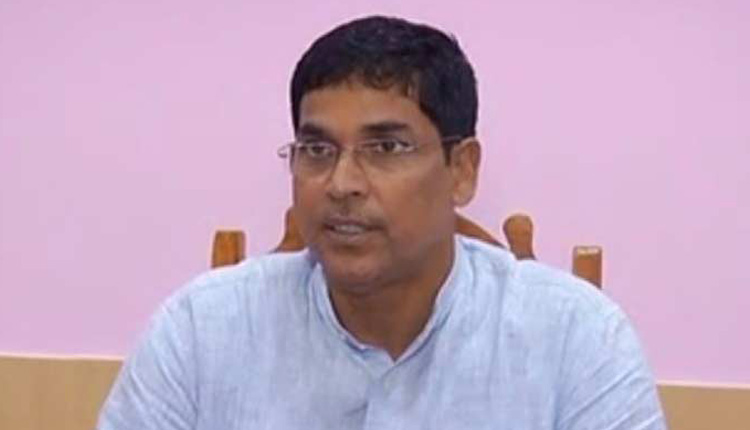 Bhubaneswar: Bharatiya Janata Party State General Secretary Lekhashree Samantsinghar on Friday asked the Biju Janata Dal (BJD) to come clear over the ‘secrets’ Arun Sahoo held which has made Chief Minister Naveen Patnaik shield the minister from the accusations the latter was facing in the Pari murder case.

“Why Chief Minister Naveen Patnaik is afraid of Arun Sahoo? Does he (Sahoo) know any secret about ‘Third Floor’ that has the potential to put Patnaik in trouble?” she asked apparently indicating the power corridors of the state that has often been touted to run a de facto government in the State.

Earlier during the day, Lekhashree, along with the BJP Mahila Morcha workers, tried to gherao the residence of Sahoo, the Higher Education Minister of Odisha, in Bhubaneswar demanding an investigation by the CBI into the kidnapping of five-year-old Nayagarh girl Pari. She also demanded the immediate removal of Sahu from his ministerial position in the interest of a fair probe into the ghastly crime that has sent shockwaves across the State.

“At least 5500 children have been kidnapped in Odisha in last two years. Its investigation should have been done at the topmost level. We demand that CBI should be brought in to probe all these kidnappings including Pari,” she said.

Targeting the government over allegations of trafficking and trade of human organs in the State, Lekhashree said, “I want to know who are the receivers of Pari’s kidney and eyes. Arun Sahu’s links with criminals is an open secret now. He should be arrested at the earliest.”

“If the CM has the time to attend sponsored programmes, he should might as well prove his mantle as a leader by sacking Sahoo from his Cabinet,” she added.

She went on to threaten the government of intensifying the protest if their demands were not met with soon.

BJP has been accusing Sahoo of shielding the prime accused in the crime, Babuli Nayak. Party State president Sameer Mohanty who earlier alleged the involvement of a well organised organ trade racket in the kidnapping and murder of Pari, on Friday said that the party will spearhead a mass movement across the State for justice to the victim.

He said the prime accused-Babuli Nayak, who is a close confidante of Minister Arun Sahoo, runs the racket at the behest of the latter. While reiterating his demand for a CBI inquiry, Mohanty feared that the SIT probe would fail to unravel the truth since the accused has been protected by a minister.

It is worth mentioning that ‘Pari’ was allegedly abducted before her skeletal remains were found in the backyard of her house in July this year. Her parents, who ran from pillar to post for justice for their daughter, attempted to immolate themselves in front of the Assembly building last week in a desperate bid to draw the government’s attention to their plight.