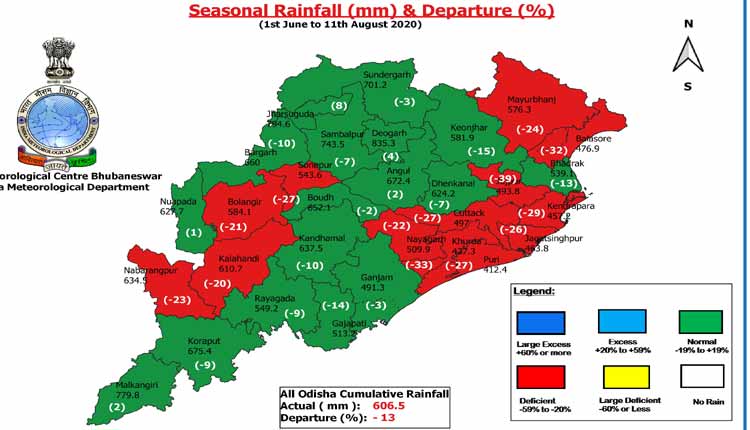 Bhubaneswar: The hopes of adequate rainfall in Odisha now rest on another Low Pressure area which is likely to develop over Bay of Bengal by August 13. As per the Regional Meteorological Centre in Bhubaneswar, the state received 606.5 mm of rainfall between June 1 and August 11 which is 12 % less than the normal precipitation of 698.9 mm.

Giving an update on the south-west monsoon status in Odisha, the Regional Meteorological Centre informed that as many as 17 districts in the State witnessed normal rainfall during the aforesaid period while Jajpur district recorded 39 % deficit.

Since onset of monsoon since June 1 to August 11, Jharsuguda district recorded an 8% excess rainfall.

Three districts in Odisha- Jajpur (39%) , Balasore (32%), and Khordha (33%) are among the districts where rainfall deficit was maximum between June 1 and August 7.

During the same period, several districts in Odisha had witnessed 40% or less rainfall.