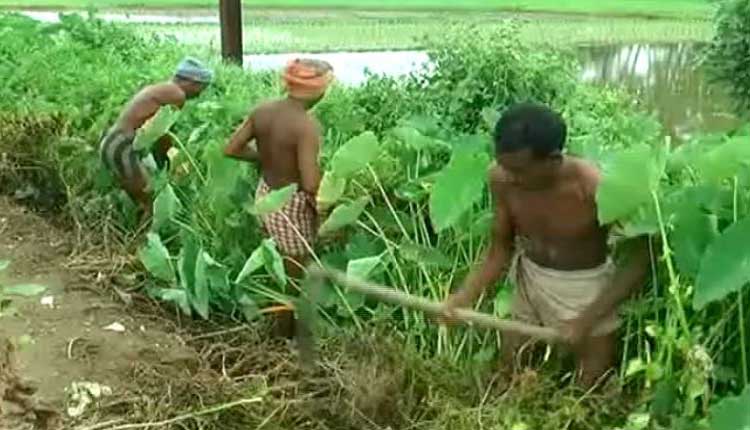 Puri/Jagatsinghpur: Even though Odisha government has rolled out several agricultural schemes, there seems to be no end to the plight of farmers in the State. Farmers in Puri and Jagatsinghpur are now staring at an uncertain future due to scanty rainfall coupled with poor irrigation system.

While farmers in Puri fear crop loss due to poor irrigation facility and deficit rain, the Jagatsingpur farmers have alleged that the government’s apathy has added to their woes.

Farmers at Dandamukundapur under Pipili irrigation subdivision in Puri alleged that the canal, which is one of their sources of irrigation, is filled with weed and they are not getting water from the source for the last 19 years.

“We depend on agriculture but with no proper irrigation system, our future seems bleak. Around 19 years ago, we had received water through the canal and had a good harvest. Since then, no one has ever bothered to know whether we are getting water for not for irrigation or not,” said Jayakrushna Swain, a farmer.

“Those, who have bore wells, are being benefitted, but due to no proper irrigation channel and insufficient rain, our agricultural lands are now lying dry,” lamented another farmer, Subas Chandra Swain.

Commenting of the farmers’ allegations, Ramakanta Parija, assistant engineer of Dandamukundapur irrigation division said, “We have speeded up restoration work of the canal to ensure water to the agricultural lands. The farmers will receive water within two days.”

Similarly, farmers of Sangrampur, Nagpur and Kalio panchayat in Jagatsinghpur depend on Machagaon Kalio Sub Minor canal for irrigation. But with no water supply, the farmers in the district are also scared of crop loss this season.

Deprived of water supply, the farmers reportedly met Balikuda assistant engineer on July 27 and demanded to release water. Even after five days, when their demands were not met, the irate farmers gheraoed the engineer’s office.

“The assistant engineer had promised to release water in two days. However, we are yet to receive the same. We demand release of water on an emergency basis,” Natha Kandi, a farmer said.

“I had promised them to release water in two days. However, even after several attempts, we failed to release it. But, I assure they will receive water in a day,” said Biplab Sahu, the assistant engineer.