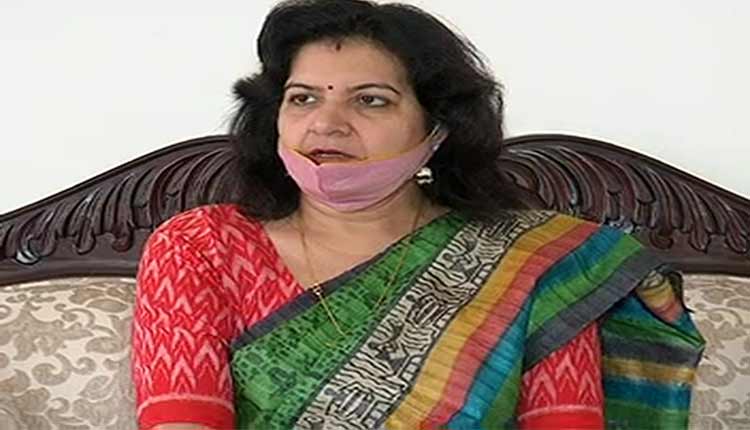 Bhubaneswar: The COVID-19 management has now turned into an opportunity for Odisha government to indulge in corruption and mint money, alleged Bhubaneswar MP Aparajita Sarangi on Sunday.

Slamming Odisha government on Bhubaneswar Municipal Corporation’s (BMC) notice to OTV and attempts of the Commissionerate Police to muzzle media, Sarangi said, “Not only OTV, any media should be patted on the back for bringing such irregularities to the notice of the Government. It has raised questions on transparency and clearly shows that the State government is intolerant and lacks courage.”

In an exclusive interview, Sarangi said that the audio clip which was doing rounds on social media and subsequently carried on OTV is just the tip-of the ice-berg and the people of Odisha are aware about the COVID-19 situation and mismanagement in various dedicated COVID hospitals in the State.

“One needs courage to speak and hear the truth. How far it is justified to throttle media by threatning and exerting force? One should be open to criticisms,” the MP said adding that, “I have been receiving over 150 calls from people regarding COVID-19 mismanagement on a daily basis apart from grievances received through social media including Twitter in the last fortnight.”

#BMCNoticeToOTV: It seems #Odisha govt lacks the courage that one needs to tell & listen to truth. In a democracy, media should be welcomed for pointing out mistakes instead of being threatened & suppressed to cover up truth, says Bhubaneswar MP Aparajita Sarangi#MuzzlingMedia pic.twitter.com/3pdShrL5to

While speaking to OTV, Sarangi further alleged there has been massive irregularities in COVID-19 management. “PPE kits have been procured from an optical shop in Chennai and masks, testing supply kits and other articles have been procured from firms in Punjab and Haryana at inflated rates. Whatever facts we have received will be made public at the appropriate time.”

The BJP MP from Bhubaneswar raised questions on the overall COVID-19 management in the State.

“Odisha government keeps on boasting about its 5-T initiative. If the State government has courage, it should share all information on expenses incurred on treatment of COVID patients and the money sanctioned to COVID hospitals,” Sarangi added.

Lok Sabha MP and former Union Minister, Jual Oram also stated that there has been massive irregularities in COVID-19 management in Odisha and the State government’s vindictive action against media is unfortunate.

Congress MP from Koraput Saptagiri Ulaka said, “Odisha government should work in tandem with media to fight rumours and address grievances of people. At a time when COVID-19 deaths are unreported, people are not getting food properly at COVID Care Centres , government is trying to conceal facts. People are making such irregularities viral on social media.”

Responding to MP Aparajita Sarangi’s allegations, BJD MLA Debi Prasad Mishra said, “Only making allegations about Tamil Nadu link or any other things will not do. The MP should come out with adequate evidence regarding irregularities in any department/ institution.”

On the issue of BMC notice to OTV, Minister Ashok Panda said, “Everybody including media has responsibility towards society and all should act within a Lakshman Rekha.”

BJD MLAs from Bhubaneswar, Sushant Rout and Anant Narayan Jena refused to comment on the matter.