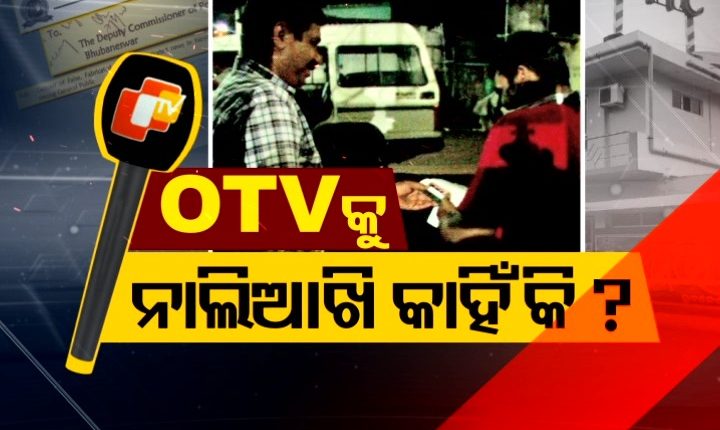 Bhubaneswar: Is bringing out the problems of the people, their allegations, and loopholes in the system to the public eye, a crime? Targeted aggression of the Bhubaneswar Municipal Corporation towards the largest media house in the State-Odisha Television Limited (OTV)-bears testimony to the highhandedness of the state government. Showing gross intolerance towards being pointed out its own mistakes, the Bhubaneswar civic body went to such an extent as filing a complaint that too, a baseless one, and also serving a show cause notice through police to the media house in the middle of the night. A team of the Commissionerate Police arrived at OTV office in the middle of the night on Friday and asked the office bearers of the media house to within a short period of time.

However, OTV continues to stand its ground on free, fair & unbiased journalism and wants to clarify that it has never deviated from its charter of conduct and always presented news in an unbiased manner since its inception. In fact, it has been at the forefront in highlighting people’s problems as well as helping the government in disseminating its important messages to the public.

While the BMC says that two ‘contentious’ news reports were telecast on OTV on August 6, we clarify that they were published on the social media handles of OTV as ‘viral videos,’ the content of which showed a Covid patient speaking to his friend on phone about his experience at a Covid hospital. In fact, in the post, it was also mentioned that government’s response is awaited and will be updated as soon as it is received.

In a similar development on July 30, a report posted on the social media platform of OTV showed residents of Bhubaneswar Harinagar slum levelling serious allegations of Covid mismanagement. Later when the BMC came out with a clarification, OTV was prompt to telecast it to give public both sides of the story. As a responsible media organisation, it was only a sincere attempt by OTV to show the problems faced by the people.

Criticisms have poured from various quarters against the administration’s action against free and fair media at a time when the entire government machinery should be focussed on fighting the disease outbreak.

“If the state government wants all media houses to act as their mouthpiece, then where is the fundamental duty of a journalist? You cannot serve notice to media for showing what has actually been said by some persons,” said the Leader of Opposition, Pradipta Nayak.

“Such behaviour towards a well-established media house is not acceptable. I do not understand what crime the media house did that the administration filed an FIR,” Odisha BJP President, Sameer Mohanty said.

“There are so many lapses in COVID19 management in the state. People are facing a lot of problems. A law should be brought in the Assembly to regulate social media,” said Congress MLA, Tara Prasad Bahinipati.

In crucial times like COVID pandemic, media has played most pivotal role in fightback against the disease. But it is shocking to see how Odisha govt has stooped so low to show its intolerance & arrogance of power, panellists noted during an OTV discussion on the issue.

In crucial times like COVID pandemic, media has played most pivotal role in fightback against the disease. But it is shocking to see how #Odisha govt has stooped so low to show its intolerance & arrogance of power: Panellists during discussion on #BMCNoticeToOTV #MuzzlingMedia pic.twitter.com/sHZuFMlzCH

Meanwhile, OTV authorities today have sought 7-day period to file response in connection with the issue.

Once again, we want to reiterate that we have no objective to sensationalise any news for the sake of TRPs, but because of our ethical, & unbiased journalism, we continue to be well accepted by all and sundry.