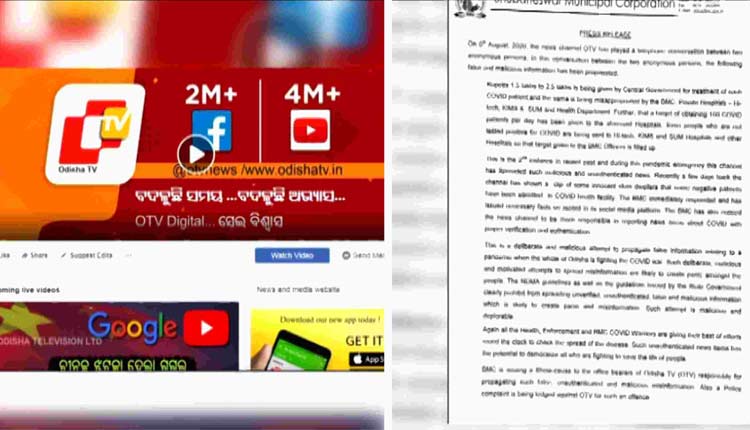 Bhubaneswar: Odisha Television Ltd (OTV) has never deviated from its charter and always
presented news in an unbiased manner since its inception. As a responsible media house, OTV has been at the forefront bringing to limelight issues including government information and the problems faced by people even during the COVID-19 pandemic.

This clarification is in response to the show cause notice and police complaint filed by Bhubaneswar Municipal Corporation (BMC) in connection with two news reports carried on OTV’s social media platform.

The BMC, on Friday, issued a show-cause notice and lodged a police complaint against OTV and later informed through a press release.

With regard to the complaints, OTV would clarify that a viral audio-clip purportedly carrying a conversation between a COVID-19 positive patient and his friend was posted on social media on August 6 with a mention that it was purely a viral video and the statements of the Odisha government or other concerned officials are yet to be received on the matter. Once their version reaches, we will post that too, the description of the post further had stated.

On BMC’s objection on the July 30 viral video, we had earlier also stated that it was based on the allegations levelled by Hari Nagar slum dwellers on the municipal corporation’s COVID-19 management. The same clarification was also carried by all OTV news platforms.

As a responsible media organization, OTV had aired the statement of BMC as soon as it was received by the channel.

OTV has always been highlighting the problems, grievances of people. The channel never sensationalises or airs false reports for TRP.

After Microsoft, Facebook Criticises Apple For Restricting Its Gaming App